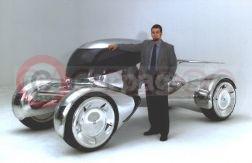 Paris this year sees the launch of a second design competition, where aspiring car designers from around the world are invited to design a stylish ‘retro-futuristic’ Peugeot, with the winning design being built as a full-scale model.

The competition idea was first launched at the Paris Motor Show in September 2000, where Peugeot launched the competition on the Internet with the theme ‘Design your Peugeot for 2020’.

With more than 2,000 designs from 80 countries submitted, the best 50 projects were selected by visitors to the Internet site. The jury, headed by Frédéric Saint-Geours, Director General of Automobiles Peugeot, finally selected the Moonster project from the 10 finalists. This winning design was the work of young Yugoslav design student, Marko Lukovic.

He received his trophy ‘La Griffe’ at the Geneva Motor Show 2001, and a full size model of his project was constructed and exhibited on the Peugeot stand at the Frankfurt Motor Show later that year.

For 2002, the interactive design website for entrants to submit their projects can be found at www.peugeot-concours-design.com.

Philippe Houy, product manager of concept car projects, explains what is meant by a retro-futuristic concept. "We used this term because we wanted to give participants the opportunity to draw inspiration from previous Peugeot models in order to produce a model for the future. They can base their idea on a model which actually existed or make use of certain details, such as a radiator grille, lights, specific shapes, and so on."

Entrants must be over 14 years of age and will be invited to draw inspiration from one or several models from Peugeot’s history.

The closing date for entries is 9 December 2002. At the end of December, the 40 projects selected in the preliminary round will be voted on by Internet users and the press. In January 2003, the 10 projects to reach the final round will be shown together on the site prior to a meeting of the final jury in February.

The result will be announced at the Geneva Motor Show 2003, where the trophy will be presented to the winner, as well as a cheque for 5,000 euros. The actual concept will then be built ready to unveil at Frankfurt in September 2003.