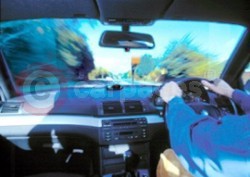 With the number of safety cameras expected to treble in the next few years, Peugeot has added the latest Cyclops GPS Driver Safety System to its approved accessory list.

In 2001, the latest year for which official figures are available, 1.1m speeding fines were issued across the UK. However, the introduction of ‘netting off’ nationally – whereby Police Forces are able to reinvest fines in more cameras – in August 2001, is expected to push this figure through the 3m barrier.

The new deal will see the market leading Cyclops system being sold across Peugeot’s entire car and LCV model range.

By offering a powerful three layer warning system, Cyclops alerts and protects the driver to the changing speed conditions controlled by safety cameras.

"Drivers benefit from an audible warning of cameras 800m away, a clear display of the speed limit and a combined audible and visible alert if they are approaching too fast," explains Steve Wreford, Managing Director of Cyclops.

"The net effect is a safer driving environment for the motorist. With more and more people receiving fines and points, it protects a drivers’ life, licence and livelihood."

The introduction of Cyclops to Peugeot dealers comes on the back of an exponential rise in demand for in-car driver safety devices over the past twelve months.

Wreford adds: "Statistically, safety cameras certainly help reduce accidents but they also mean more fines and the increased likelihood of points. With three million expected to be caught this year, the spectre of losing your licence is very a real one. The question is what price do you place on protecting yourself?"

Priced at just £325, including six months subscription, and remote GPS antenna, Cyclops is available to Peugeot customers through its 350 UK dealers.

For details of stockists visit www.cyclops-uk.com