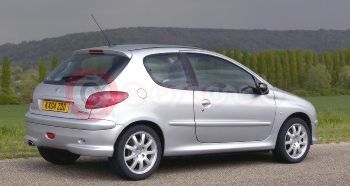 The new Peugeot 407 is undoubtedly one of the most significant new cars of 2004, so it is fitting that it will be the star of Peugeot’s stand at this year’s Sunday Times Motor Show Live in Birmingham.

With many areas of the press claiming that the 407 sets a new standard for the class, the British public will be keen to get their first glimpse of the car both in its saloon and SW guises. With prices starting from only £14,750 on the road, it could well be high on the shopping lists of many visitors to the show. The car officially goes on sale on the 25th May, some 70 years since the first of the legendary 400-series Peugeots – the 401 – went on sale in 1934.

Diesel is traditionally an area in which Peugeot has led the industry, and some exciting new diesel cars will be a key feature of the show stand. The new range of Euro IV compliant diesel engines will be on display within an area of the stand devoted to diesel technology. The stunning twin HDi-engined ‘Hoggar’ concept car will sit alongside Peugeot’s latest production offerings, including the 1.6 litre HDi 110 bhp that will be fitted to the new 206 GTi HDi – a car that incorporates all the sporty features of the standard GTi but utilises this superb new engine. This engine will also power the 407 and 307 hatchback and estate range.

The new 2.0 litre HDi 136 bhp diesel engine offers both high performance and outstanding refinement and will be fitted to the 407 and 307 XSi HDi and SW models.

Peugeot is known worldwide for its success in world rallying, having secured three consecutive world titles in recent years. 2004 is the debut season for the 307CC inspired WRC contender and has once again demonstrated world beating potential. The show stand will feature one of the new 307CC WRC cars alongside two simulators where visitors of all ages can pitch their skill against one another.

Peugeot 407 Images may not be UK specification cars. Colours and exterior and/or interior elements may differ from actual models.