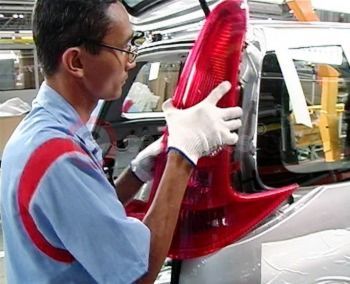 The production launch, representing an investment of €25 million, makes the 206 SW the fourth Group vehicle manufactured at Porto Real, joining the Peugeot 206, Citroen Xsara Picasso and Citroen C3. With this new model, the Group maintains its schedule of one production launch per year since the site was inaugurated in 2001.

A target of 15,000 vehicles has been set for 2005, the first full year of production. The Porto Real-made 206 SW is primarily intended for the Brazilian market, but will also be exported to other Mercosur and Latin American countries.

The Peugeot 206 SW will be equipped with the 1.6 litre 16-valve engine produced at Porto Real, as well as with the 1.4 litre 8-valve engine for which local production began in August 2004 at a cost of €17 million.

The Porto Real plant has produced more than 160,000 vehicles since it was inaugurated. This output reflects Peugeot and Citroen’s performance in the region and the Brazilian market’s recovery in 2004.

Group sales in Brazil for the period ended 31 October totalled 51,200 vehicles, an increase of 13.5% in a market up 11.2% on the previous year. With a market share of 4.3%, PSA Peugeot Citroen is the country’s fifth largest carmaker and the leader among recently arrived manufacturers.

The launch of the Peugeot 206 SW confirms Brazil’s strategic importance for PSA Peugeot Citroen, which has identified Mercosur as one of its three priority growth regions.

Peugeot 206 SW Images may not be UK specification cars. Colours and exterior and/or interior elements may differ from actual models.