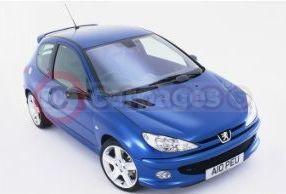 The latest Peugeot GTi - built exclusively at the Ryton manufacturing plant near Coventry - comes with a 180 bhp engine, making it the most powerful road-going version of the best-selling 206. The car will receive its international première at this year's Paris Motor Show, and will also be exhibited at the Birmingham International Motor Show in October.

This new three door 'hot hatch' will take your breath away with its looks, style, acceleration, and power.

The 206 GTi 180 has been inspired by the success of Peugeot's World Rally Championship sibling, the 206 WRC, which is dominating this year's Championship series, and which has secured the manufacturers' title for Peugeot for the last two seasons (2000 and 2001).

It has a 2.0 litre 16-valve four cylinder petrol engine which delivers 180 bhp at 7,000 rpm, a top speed of 143 mph*, and a 0-62 mph acceleration time of just 7.1 seconds*. Engine performance has been enhanced with VVT (variable valve timing), which ensures optimum engine torque is delivered through a wide engine speed range, for smooth driving around town and performance driving out on the open road.

The GTi 180 has modified front suspension geometry and stiffer springs, compared with the 206 GTi (138 bhp). At the rear, the suspension includes two tie rods to maintain rear axle stability and improve road holding - this is similar to that first seen on the recently launched 206 SW. It also has ESP (electronic stability programme), with the combined functions of traction control and directional control, which can be deactivated if required.

The five-speed gearbox has been designed for the keen driver, with a close ratio transmission (except for first gear) optimising acceleration, particularly on winding roads. Changing gear is effected more quickly than in the 206 GTi (138 bhp), as the travel has been reduced, improving the driving experience by facilitating faster gear changes.

Inside, racing-style sports seats hug the driver and occupants both in the front and rear. The instrument binnacle, which houses black dials with chrome surrounds, is finished in leather with contrasting stitching, and contains the following: speedometer, rev counter, oil temperature gauge, water temperature gauge, fuel gauge. The interior is further enhanced by an aluminium gear knob and pedals, as well as a microcarbon look to the centre console which echoes the finish on the exterior door mirrors.

Due to the very nature of the car, the following safety features come as standard:

Available in four body colours - Flamenco Red, Onyx Black, Aluminium and Aegean Blue - the new 206 GTi 180 goes on sale in the UK in early 2003. Full specification and pricing details for the UK will be announced at a later date.

The Peugeot 206 Sports range already includes the Quiksilver, XSi, Dturbo and GTi (138 bhp) - all of which have proved popular with customers looking for a stylish, fun, value for money performance car. The new GTi 180 will be the most powerful 206 on sale, and will expand the Sports range to five models.