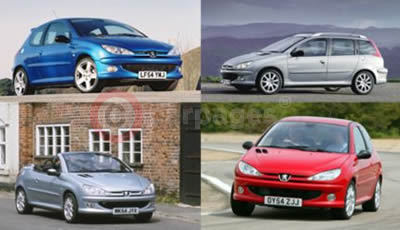 At launch the 206 was available in 3 and 5-door versions with a choice of three petrol engines, ranging in power output from 60 bhp to 90 bhp and one normally aspirated diesel engine producing 70 bhp.

The vehicle was produced at only two production centres, Mulhouse in France and Ryton in the UK.

Today the 206 range has grown to include a GTi version, coupe cabriolet version and an SW version.

Setting standards has been a key word in the development of the 206. It brought the first electric folding roof coupe cabriolet to the volume car market; it introduced multiplexing technology into the small car segment of the volume car market, and now is the only diesel B segment car fitted with a particle emission filter - a world first. And of course it was the base vehicle for the successful 206 WRC (winner of three World Rally Championships - 2000, 2001 and 2003).

From those early days of only eight members in the family, it has grown into a family of 51 different versions, produced in seven different production centres around the world.

So far over 4.5 million 206’s have been sold worldwide since its launch in 1998 and it is sold in 85 different world markets.

It is already the fastest selling Peugeot vehicle to achieve over four million sales, a feat it has achieved in less than six years. The previous holder of the title, the Peugeot 205, took over nine years to reach the same sales volume.

As it enters its seventh year, 10 new members will join the family which will bring even more appeal to this amazing little car and continue to write another chapter in 206 history.

Peugeot 206 Images may not be UK specification cars. Colours and exterior and/or interior elements may differ from actual models.