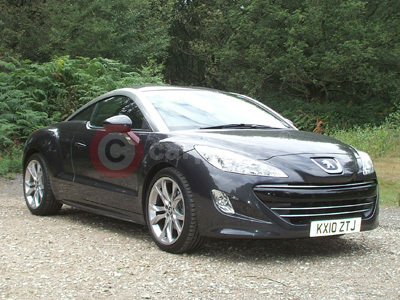 The elegant and sporty Peugeot RCZ is something of a departure for Peugeot - not only is it totally different to anything else in the company's line-up but it doesn't conform to the usual numerical naming protocol.

Pinning an RCZ badge on the car makes sure that it is recognised as a standalone car; but not for long as the company tells us that there are plans for more 'specials' over the next few years.

The production Peugeot RCZ has, for the most part, stayed true to the Peugeot 2007 concept car from which it was derived. It retains the curvaceously futuristic lines that made it such a hit at the Frankfurt Show. So much so that a few short months later, it was decided to go ahead with production. Such was the level of enthusiasm that the first available models, a 200 Limited Edition run, were sold within 48 hours.

Clearly the Peugeot RCZ, which is not to be confused with the Honda CR-Z, is all about looks. It has already added a few more trophies to Peugeot's cabinet, which was already burgeoning after the successes of the Peugeot 3008 and Peugeot 5008. Diesel Car voted it Sportscar of the Year, while in the Auto Express awards, the Peugeot RCZ won the Best Design and Best Coupe titles.

At the front end we have Peugeot's traditionally feline headlight clusters that spill over into the muscular wheelarches. The large Peugeot emblem panel, in the new style, marks the front edge of the broad aluminium bonnet, which is well contoured with two strong diagonal elevations taking the eye to the A-pillars. A broad and deep front grille grins menacingly out from between cat's eye foglight housings and makes the car look as if it is ready to pounce.

In comparison, the rear end appears a littler more chunky but it still has all the eye-catching curves. Between the equally feline taillights with LED illumination, is a neat signature panel bearing the Peugeot lion and discrete naming. A strip of high-level brake lights separates this from the Active Rear Spoiler, which rises out of the bodywork in two stages. At speeds above 53mph it raises by 19-degrees and at 96mph the angle is increased to 34-degrees. Alternatively, the spoiler can be activated to the second position from within the cabin.

The Peugeot RCZ is described as a saloon coupe, and as a saloon, it has quite a substantial boot. Lifting the lid reveals a luggage space with a capacity of 321-litres (measured with the VDA method and not liquid). This is impressive enough but with the rear seats folded, the capacity increases to 639-litres - enough for suitcases and golf clubs.

But what really sets the Peugeot RCZ apart from other coupes is the rear windscreen and roof. Although there is just the slightest hint of Audi TT, the sensuous 'double-bubble' roof and rear screen provides a strong distinction. It is this area that attracts the most attention and when driving the Peugeot RCZ, you will see people describing the shape with a wave-like motion of the hand, in a similar manner to a cricket umpire declaring a four.

The thick, aluminium cant rails frame the black roof and darkened rear glazing, and it is these pronounced arches define the car's silhouette. The roofline joins the boot just ahead of the rear axle-line and from the side, the strong coupe design is enhanced by the bulging rear wheelarches, the 'step-down' at the B-pillar and well defined contour lines, while 18- or 19-inch alloys complete the picture.

Peugeot RCZ Images may not be UK specification cars. Colours and exterior and/or interior elements may differ from actual models.