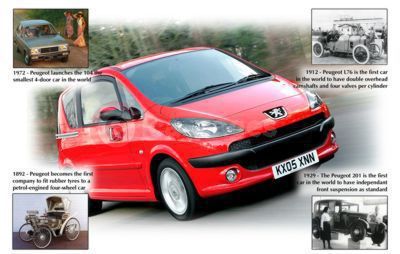 Introducing ‘World firsts’ is not new to Peugeot. The Peugeot 1007 might be the first car to have electric front sliding doors, but it is just another first from the manufacturer who, over its 116 year history has been a true innovator as the following indicates:

From petrol driven cars on rubber tyres, to the ultimate city car the Peugeot 1007, innovation is clearly in the DNA of Peugeot.

Innovation, however, needs to be affordable and with the new Peugeot 1007 starting at only £10,850 on the road, first for value should also be included in the list.

The next chapter in Peugeot’s history of innovation, the Peugeot 1007, will be launched this month.

Peugeot 1007 Images may not be UK specification cars. Colours and exterior and/or interior elements may differ from actual models.