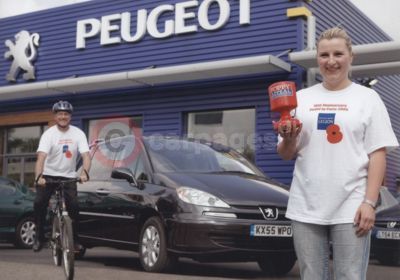 Peugeot is going back to its roots and providing support vehicles for the annual Royal British Legion ‘Pedal to Paris’ charity bike ride.

It was through the bicycle that the public got to know the name Peugeot, when back in 1882 Peugeot launched its Grand-Bi bicycle. Now 115 years later, Peugeot still manufactures bicycles, but is better known for its range of motor vehicles, from the small city car the 107, to the work horse of the range the Boxer van.

Peugeot’s Warwick Wright Chiswick dealership is supplying The Royal British Legion with three 807s and two Boxer vans as ‘support’ vehicles for the charity bike ride, which departs from Greenwich Park at 8am on Thursday 8 September.

The vehicles will be used to carry essential equipment including spare bicycles, bicycle stands, tools and supplies such as food, water and first aid kits. The 807s will also act as lead vehicles to transport crew members ahead of the cyclists to set up drinks stations and arrange accommodation.

The 807 was an obvious choice for a support vehicle with its sliding doors making access to the vehicle quick and hassle free, a spacious interior with seven seats, which can be rearranged, or taken out as required, and 58 storage areas within its innovative cabin area. The Boxer vans are also fitted with side sliding doors for easy access and provide a load capacity of 10 m3. Both the 807s and Boxer vans are powered by Peugeot’s HDi diesel engines.

Nick Hanmer, event organiser at The Royal British Legion says: "The vehicles provided by Peugeot are perfect for carrying all the equipment and supplies we need for this high profile money raising event. The flexibility of the 807s means that we can change the seating arrangements to carry crew members and any ‘lost’ or injured cyclists, or we can transport bulky equipment, such as physiotherapist’s tables.

"The Boxer vans are also essential to this bicycle ride, allowing us to transport our dedicated teams of mechanics, their various tools and other essential supplies."

Geoff Watts, fleet sales manager at Peugeot says; "It’s always great to be able to support such worthwhile charitable causes. We were pleased we had the right vehicles to support The Royal British Legion riders in what is sure to be a testing but very rewarding physical event."

This year sees the tenth anniversary of the Royal British Legion’s four-day, 277 mile long charity bicycle ride, during which time it has raised over £2.5 million. Two hundred and seventy supporters of the charity will participate, raising some £250,000 for its vital welfare work with current servicemen and women and ex-service people and their dependants. The riders, some of whom are cycling in memory of fallen comrades or relatives, will also have the opportunity to stop en route for remembrance ceremonies at memorials and commemorative sites along the way.

Peugeot 807 Images may not be UK specification cars. Colours and exterior and/or interior elements may differ from actual models.