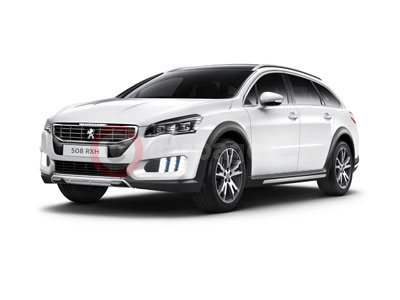 The Peugeot 508 has undergone a makeover 2015, with new engines, tweaks to the design with a new corporate look and the latest technology.

The revisions include the introduction of a new 2.0-litre BlueHDi 150 6-speed manual� with CO2 emissions 105g/km.

Replacing the Euro 5 1.6-litre THP 156 Peugeot has introduced a new Euro 6 compliant engine: the petrol 1.6 litre THP 165 Stop & Start, with either a six-speed manual gearbox or the new EAT6 six-speed automatic gearbox. CO2 emissions from are 131g/km with a 6-speed manual (it was 144g/km at best on the previous generation).

The Peugeot 508’s exterior features a new front grille set in a new more horizontal bonnet, which in turn is more vertical with the Peugeot Lion centred - the front lights are now all LED driven. The rear lamps on the Saloon have also been redesigned to make them more horizontal than previously, whether viewed from the side or from directly behind and the opalescent red effect of the three lions claws which according to Peugeot provides a visual signature.

The interior now includes a 7” touch screen which groups together the majority of the 508’s functionalities into one interface. Options include Blind Spot Sensors and a reversing camera, providing a colour image on the touch screen.

There is introduction of PEUGEOT Connect Apps, which can provide real time, information such as free parking spaces nearby, fuel prices at filling stations in the vicinity, traffic and weather information, and tourist information from the Michelin Guide or TripAdvisor - subject to connectivity.

The new generation Peugeot 508 will go on sale on the 10th September 2014, prices are yet to be announced.

This is a 7-year+ news article, from our Peugeot archive, which dates back to the year 2000.

If in doubt check with your local Peugeot dealer as car prices and technical data will have changed since 2014.

Peugeot 508 Images may not be UK specification cars. Colours and exterior and/or interior elements may differ from actual models.