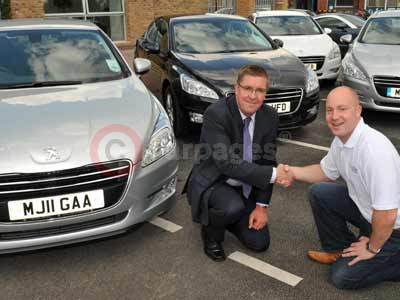 Easi-Drive Takes Delivery of The Peugeot 508

Easi-Drive, the accident management specialist has become the first UK company to take delivery of the Peugeot 508.

A combination of 38 Peugeot 508 saloons and SWs were delivered to Director Dan Bellamy. He said: "We started the company 10 years ago with just five cars, two of which were Peugeot. We've grown at a phenomenal rate and as we've expanded, so too has our fleet of Peugeot cars.

"Our primary goal is to get motorists who've unfortunately been involved in a road traffic accident, which might not necessarily have been their fault, back on the road as soon as possible, in a vehicle similar to their own. We have never received a single complaint whenever we've placed a customer into a Peugeot, indeed many see it as an upgrade!

"As soon as I heard Peugeot was bringing out a new large family car I knew instantly we had to include it on our fleet."

Mark Warwick, Key Account Manager for Peugeot, said: "Easi-Drive was first out of the blocks in placing a 508 fleet order and deservedly became the first company in the country to receive its cars."

He added: "Since its inception Easi-Drive has been a superb advocate of Peugeot, this year it'll receive 180 cars from us and we are delighted Dan and his company continue to develop his business by using Peugeot cars."

This is a 10-year+ news article, from our Peugeot archive, which dates back to the year 2000.

If in doubt check with your local Peugeot dealer as car prices and technical data will have changed since 2011.

Peugeot 508 Images may not be UK specification cars. Colours and exterior and/or interior elements may differ from actual models.