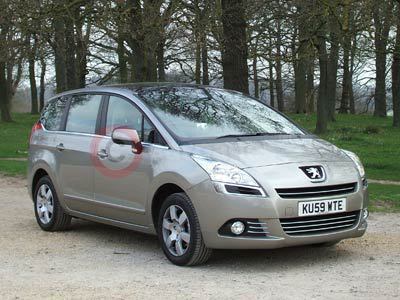 The Peugeot 5 series is back in the shape of the new Peugeot 5008. Harking back to, and building on the strengths of the Peugeot 504 and the seven-seat Peugeot 505, this new car is set to be just as popular and has already gained the What Car?, MPV of the Year title…and it has only been on sale since January 2010.

January was a particularly good month for Peugeot, as the company collected two awards at the What Car? ceremony - the other was for the Peugeot 3008 crossover, which was crowned Car of the Year. And well deserved, too.

The Peugeot 5008 is described as compact and for sure, at 4.5-metres in length and 1.8 metres wide, it is not the largest car on the road, which makes the interior space seem even more TARDIS-like.

There are eight exterior colours from which to choose including a new metallic Sky Blue. The Peugeot 5008 test car was in Vapor Grey, a colour that accentuates the smart sophisticated body styling.

There is nothing outlandish about the Peugeot 5008’s looks; the front end features a double grille, divided by a bar of bodywork and a deep U shape that serves to define the edges of the headlight clusters. The bonnet is quite rounded, in keeping with pedestrian safety policies, which contributed to the overall, 5-star rating in the new Euro NCAP safety tests.

In profile, the lower edge of the headlights echo the curve of the wheelarches and mark the start of a design line, that moves towards the rear at the base of the straight window-line. The pillars are black, so the roof appears to be floating and they also make the unusual taillight clusters stand out. Instead of carrying over into the tailgate, which has increasingly been the mode, they seem to hook over the rear haunches of the car and impinge slightly on the windows. The advantage of this positioning is that they can be seen from the side as well as the rear and are still visible when the tailgate is open.

On the other side of the tailgate is a flexible space, and one of which Peugeot is justifiably proud. The shape is a fairly regular rectangle so there are no awkward mouldings to limit the load. The floor is level with the sill for easy loading and a simple pull on the straps brings the two rearmost seats into position. These are full size and much the same as those in the second row, although they don’t have the slide or recline functions.

The Peugeot 5008’s second row features three individual seats with ISOFIX anchors on the outer ones. These also fold, cinema style, to make room for passengers to get into the very back of the car. So, all of the seats can be moved or lowered to form a flat floor offering a flexible space of between 758- and 2,506-litres. Furthermore, with the front passenger seat folded, the 5008 can accommodate items up to 2.76 metres in length.

Peugeot 5008 Images may not be UK specification cars. Colours and exterior and/or interior elements may differ from actual models.