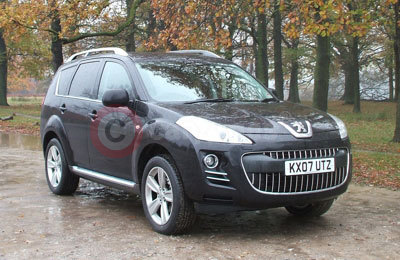 The 4007 is Peugeot’s first foray into the SUV market and, for a first effort, the company has done extremely well. But not without a little help from its friends.

In fact, the 4007 is a prime example of the way in which the modern motor industry operates. PSA Peugeot Citroen is not noted for its off-road know-how however, the Mitsubishi Motor Corporation is. So, a collaboration took place between the two companies that resulted in the Citroen C-Crosser and the 4007, which is almost the same but better than Mitsubishi’s own Outlander. The cross-pollination extends further as the Outlander’s platform was, in turn, developed in collaboration with Daimler Chrysler.

The different engine choices are a further example of inter-company sharing. The Outlander uses a Volkswagen engine but Peugeot, which tends to work with BMW on smaller power units have opted for the 2.2 HDi diesel unit from Ford, which can also be found in the Freelander 2. Clearly, what you see isn’t always what you get but it makes sense and keeps costs down. And, rather than ending up as some pick’n’mix package, it all comes together, making the 4007 look and feel like some of the more expensive SUVs on the market.

From the side, the similarity with the Outlander is evident. However, the Peugeot Style Centre has got to grips with the front and rear. The bonnet has lost the deep, ’V’ contour, which features heavily in the smaller cars. What remains are the ‘feline’ headlamps and a huge front grille with a high-level bump-bar, giving us another example of the ‘new face’ of Peugeot.

While the large Peugeot badge, emblazoned on the bonnet, seems to grow bigger with every new car, the logo on the rear, brushed-aluminium strip is a little more subdued but still leaves following drivers in no doubt of what’s in front. This strip, which separates the curved tail-lights also serves to break up the heaviness of the rear end and emphasises the line along which the split tailgate divides.

Peugeot 4007 Images may not be UK specification cars. Colours and exterior and/or interior elements may differ from actual models.