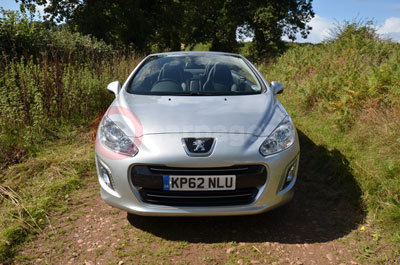 In 1935 Peugeot pioneered the folding metal roof (this system was called ‘Eclipse’) with the introduction of the 401 Eclipse and it must have proved popular as it was followed by the 402 and then the 601 and 602 models.

Peugeot introduced the modern equivalent the 206 CC in 2000.

There is a choice of two petrol and two diesel engines, both petrol units are 1598cc's with either 120bhp (5-speed manual) or 156bhp (6-speed manual).

On our test route which includes mixed motorway and urban driving we were achieving around 38.9 mpg.

We found the engine flexible and rewarding although the fuel consumption was a little disappointing. We thought the engine was relatively quiet and didn't find that noise intruded into the cabin even with the roof down.

There was minimal lag from the 2.0 litre diesel engine - but torque steer was noticeable especially when pulling out of junctions.

This is a 8-year+ news article, from our Peugeot archive, which dates back to the year 2000.

If in doubt check with your local Peugeot dealer as car prices and technical data will have changed since 2013.

Peugeot 308 CC Images may not be UK specification cars. Colours and exterior and/or interior elements may differ from actual models.