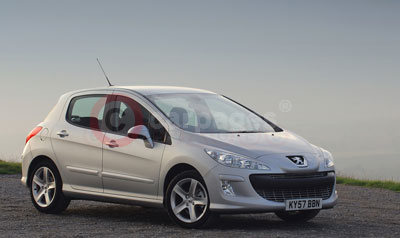 Peugeot has expanded the 308 hatchback range with the introduction of eight new models.

Peugeot’s award winning 308 range now benefits from the introduction of a new six-speed manual gearbox, available on the S, Sport and SE HDi 110 models. This new gearbox has been designed in-house and compared to the original five-speed manual gearbox, under certain driving conditions not only optimises fuel consumption but also enhances the 308’s already impressive interior comfort levels.

When fitted with 15” or 16” Michelin Energy Saver tyres, 308 models fitted with the new gearbox have a combined fuel consumption of 62.7 mpg and CO2emissions of 129 g/km.

Still following the six-speed route, the 308 range now also benefits from the introduction of a second new gearbox, the six-speed EGC gearbox (Electronic Gearbox Control). This electronically controlled manual gearbox, which removes the need for a clutch pedal, provides a genuine alternative to a traditional manual gearbox. This gearbox will appeal to drivers who like to change gear manually, but also enjoy the stress-free driving provided by ‘automatic’ gear changes.

Another in-house designed gearbox, it benefits from the latest developments in electronic control system software and the use of the latest-generation electro-hydraulic actuators. The use of this new technology speeds up gear selection (0.4 seconds) and improves the smoothness of the ‘clutch’ action.

The use of electronic control of the gear changes enables models fitted with this gearbox to become the second model in the 308 range, after those fitted with the 1.6 litre HDi 90 diesel engine, to emit 120 g/km of CO2 and have a combined fuel consumption of 62.7 mpg.

The final new gearbox is a six-speed automatic fitted to the 2.0 litre HDi 136 diesel engine. This automatic gearbox with “Porsche Tiptronic” sequential control will appeal to customers who are particularly keen on convenience and ease of use, while still having the option for more active driving in the sequential mode. This gearbox first appeared on the V6 petrol and HDi engines of the 607 and 407 and will top the diesel range of the 308.

The Peugeot 308 Sport version also sees the introduction of two new engine options.  One petrol, the 1.4 litre VTi 95 and the other the 1.6 litre HDi 90. Both models become the entry power plants for the Sports range and will further strengthen the 308 range in this highly competitive segment.

With the introduction of these new models, there are now seven different 308 models which emit only 120 g/km.

Over 150,000 Peugeot 308s have now been built since its launch in September 2007 and already it has been awarded the prestigious German ‘Golden Steering Wheel’ award by the German national Sunday newspaper Bild am Sonntag.

A jury consisting of racing drivers, automotive professionals and media personalities judged a range of vehicles to determine which one best met a number of key criteria, after a series of in-depth assessments and tests.

The 308 was chosen as the best compact family car and came first in nine of the 15 judgement criteria. As well as winning the award, the 23 members of the judging panel also paid special tribute to the quality of the Peugeot 308.

The Peugeot 308 now joins the six other Peugeot winners of this prestigious award: