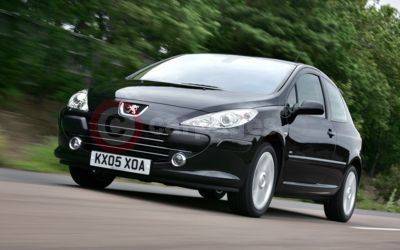 "Peugeot’s style, spacious room for the family and higher levels of equipment at virtually little extra cost, are the USPs, (unique selling points) for the new 307 range" said Dean Drew, the UK director of advertising for Peugeot - "hence our ‘Reaches New Heights’ advertising strapline." He was speaking this week at the media launch for the new Peugeot 307 range of Hatchbacks, SW sport wagons, Estates and CC cabriolet/coupes, which are now in UK dealer showrooms.

Peugeot’s have now launched three new model ranges in the UK in recent weeks in readiness for the September new registration plate sales period. The newcomers are the 107 city car, the 1007 supermini and now the heavily revised 307 range with five body styles.

UK new car sales are down 5.8 per cent for the first half of the year but Peugeot’s sales have been reduced by 17.43 per cent in the same period. Peugeot say the drop was expected because of PSA’s, (Peugeot and Citroen), policy of reducing involvement in non-profitable areas of fleet and daily rental business. Citroen’s UK sales for the first six months of this year were down 10.7 per cent.

With the UK retail market down 2.6 per cent so far this year pressure for all major manufacturers to increase sales in the profitable areas of the fleet sector to balance the books is high.

Steve Harris, Director of Fleet and Leasing for Peugeot in the UK said this week, "Our 50 per cent expectation of business user sales for the new 307 has to be retained. Traditionally the 307 has given us big daily rental opportunities and this will continue although we will be controlling the volume to ensure the trade is profitable. We therefore need to increase our share of the business and user chooser sectors in the fleet market to compensate for the lost registrations in unprofitable areas. The revised 307 range and changes to the specification levels gives us the opportunity to increase our share of the overall market. Having the new range allows us to revisit past fleet and business customers with a new sales proposition."

Peugeot say that the 307 sells in the lower medium sector of the UK car market, a sector that accounts for 28 per cent of all new cars sold, and their 307 models have an 8 per cent share of that market. The competition in the sector has grown from just 29 different models in 2001 to 51 in 2005.

Peugeot expect the 307 range to reach 60,000 sales again this year even with the run-out of the old model. They also expect to sell a total of 180,000 new passenger cars in the UK this year with sales now starting to increase due to the recent additions of new models to the range and increasing demand for the 407 models.

Fifty per cent of 307 sales will come from fleet, business, user chooser and daily rental customers and overall 50 per cent of sales will be for diesel models. Peugeot say that 76 per cent of customers will choose Hatchback models, 11 per cent SW versions, 9 per cent Estates and 4 per cent for the CC variants. The appeal of the 307 CC variants is now boosted by having a diesel engine option to compete against the Renault Megane CC, and the shortly to be announced, new generation Vauxhall Astra Convertible.

Combined sales of 8,140 vehicles makes Peugeot’s 206 and 307 CC models the best selling convertibles in the UK for the first six months of this year.

Peugeot say the restructured range has been introduced to allow easy and progressive selection throughout the range. All models have a higher specification level than the versions they replace. Trim levels are designated as E, S, SE, XSi and Feline. However all are not available on all models. For instance the new high specification Feline derivative with a new 2.0-litre, 180bhp petrol engine is an option for three and five door Hatchbacks only.

The new 307s adopt the ‘smiling face’ pioneered by the 407 models. Euro IV petrol and diesel are available for all models, the SW models have a panoramic glass roof as standard and all versions have the new CAN multiplex electrical circuitry that improves the speed and use for new visual displays, parking aids and air conditioning systems.

Peugeot 307 Images may not be UK specification cars. Colours and exterior and/or interior elements may differ from actual models.