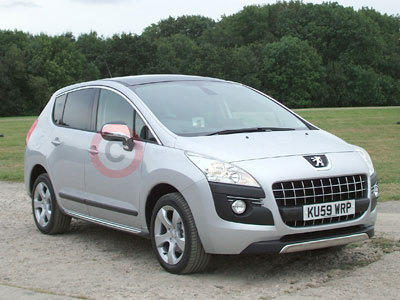 The Peugeot 3008 is Peugeot's latest newcomer and the company's version of the crossover. Longer than the Peugeot 308 and a little shorter than the SW version, the Peugeot 3008 sits firmly in the middle of the two and offers the best of both vehicles with a sporty attitude thrown in for good measure.

So, in Peugeot's book the crossover is a mix of hatch, SUV and MPV, and the Peugeot 3008 certainly ticks all the boxes and sets itself in competition with the likes of the Nissan QASHQAI and Volkswagen Golf Plus.

Built on the same platform as the Peugeot 308 hatch, the crossover stands a good bit taller, which allows the driver to sit around 10cm higher. Although the front end of the bonnet isn't visible from this position, the all round visibility is very good.

The general design initially appears somewhat plain although it has smooth curves that accentuate the wheelarches and the overall robust attitude. At the front, the Peugeot 'face' has been developed to match the size of the car and features a large, black front grille, which is a nod to some of the more expensive SUVs.

Below the redesigned and streamlined, headlight clusters are large protective side panels, which house the fog lights. At the base of the front bumper there is a black lip and chromed undertray even though the Peugeot 3008 does not have 4X4 transmission; more of which later.

When viewed from the side, the high waistline emphasises the shapely windows with black, almost invisible, B-pillars. On some models the windows have chrome trims and, at the base of the doors, protruding black rubbing strips, nicely show off the chrome sill.

The rear haunches are quite heavy, while the dart-like, wraparound light clusters, follow the contour of the rear windscreen. The Peugeot 3008 has a two-part tailgate with the split just above the rear bumper. It makes it easy to drop bags into the boot in tight spaces, while the lower part can be used as a seat. Emphasis of the 'outdoors' nature can be seen in the black protective area at the base, again with a chrome undertray.

This is a 12-year+ news article, from our Peugeot archive, which dates back to the year 2000.

If in doubt check with your local Peugeot dealer as car prices and technical data will have changed since 2009.

Peugeot 3008 Images may not be UK specification cars. Colours and exterior and/or interior elements may differ from actual models.