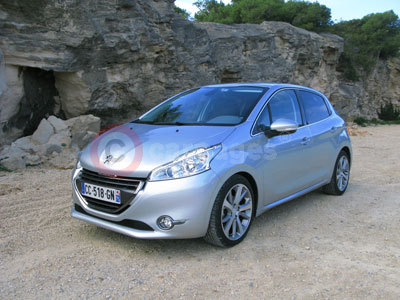 Peugeot has gone into reverse gear with its new 208. For a long time the trend with each new car model was to grow it a little bigger than the one before, but that changes with the 208, which has actually shrunk a bit. It is slightly smaller in its external dimensions than its predecessor, although with clever packaging Peugeot has created just a bit more room inside the car than the old model 207 had. Style, compactness and lighter weight are weapons with which the lion brand wants to claw in more customers.

Turn the clock back to 1980s, and the French firm had a definitive small car in the Peugeot 205, the most admired predecessor of the new 208. Over the decades, each successor has expanded to become both heavier and longer. Following the 205, the 206 tipped the scales by another 94 kg and stretched 13 cm longer; then came the 207 weighing in at 186 kg more and grown another 20 cm longer. So the smart money was on the same again for the 208, except that Peugeot has confounded expectation by chopping an average 114 kg off the weight and 7 cm off the length of its new car.

This move is aimed at injecting a bit more of the desirability factor that gave the 205, the company’s original small hatchback, its special magic. Peugeot wants to woo back some of the customers who have defected elsewhere, including younger buyers, female drivers and second-car customers. It won’t be an easy ride. The new 208 arrives on the motoring scene in tougher times than any of its predecessors confronted. A decade ago, buyers of small ‘B’ class hatchbacks could choose between 16 models from rival manufacturers. Peugeot’s new baby has 27 challengers vying for the same customers.

The 208 is available with either three or five doors, and in trim levels Access, Access+, Active, Allure and Feline. The engine choices are 1.0, 1.2, 1.4 and 1.6 VTi petrol, and 1.4 or 1.6 HDi diesels, with varying power outputs. There are also e-HDi versions of the diesel engines with stop-start fuel-saving technology. Gearbox options are manual or semi-automatic robotized manual. On sale from late June 2012, the 208 range is priced from £9,995 to £17,445.

Don’t be put off by the smaller capacity engines. The three-cylinder one-litre petrol engine is a sweet-sounding and sweet (though modestly) performing unit. It is also the most characterful in the range, while emitting only 99 g/km of CO2 to qualify it for free road tax.

This is a 9-year+ news article, from our Peugeot archive, which dates back to the year 2000.

If in doubt check with your local Peugeot dealer as car prices and technical data will have changed since 2012.

Peugeot 208 Images may not be UK specification cars. Colours and exterior and/or interior elements may differ from actual models.