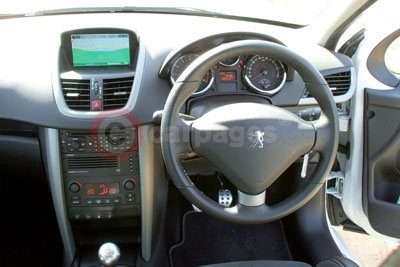 Not only are the torque figures diesel-like but the fuel consumption figures are getting there, too. Although some other hot-hatches have similar figures, returns of  28.5mpg for the urban cycle, 49.5mpg on the extra-urban, and a combined figure of 39.2mpg, is better than most. Thanks to the efficiency of the engine system, the CO2 emissions are measured at 171g/km.

An automatic transmission would reduce the engine’s performance, so Peugeot has sensibly employed a 5-speed manual box. It is used elsewhere throughout the company’s vehicle ranges but has been tweaked to make the most of the available pulling power. The lower gears are said to make for ‘more dynamic changes’ through tight bends and corners, not to mention quick getaways.

As with all the many versions of the 207, the ‘wheel-in-every-corner’ design means that the car is inherently stable. Add in the stiffened suspension and the roadholding is impressive and almost worthy of a more expensive, heavier car.

With all that torque on hand, the usual ABS with EBD or EBDF as Peugeot calls it, is not quite enough without the back up of other system. To be sure, the THP175 stops straight and quick enough but just to make sure, there’s also Emergency Brake Assist (EBA), Traction Control (ASR) and CDS, stability control, which detects under- or oversteer However, there is a new system called Steering Stability Program (SSP).

In certain conditions, such as mixed grip where one side has mud and the other tarmac, ESP limits braking to the wheels on the side with more grip - its job is to maintain stability rather than optimum braking. SSP addresses this by making the ESP work harder to brake the wheels on the tarmac side, preferably in a straight line. If the system detects any instability or deviation, it applies torque to the electric power steering system. It is a nudge to the driver to turn the steering wheel in a particular direction in order to control the skid. The ‘hint’ lasts no more than 100milliseconds after the start of braking and the driver can ignore it, if they simple want to play. Furthermore, the ESP (ASR & CDS) can also be turned off.