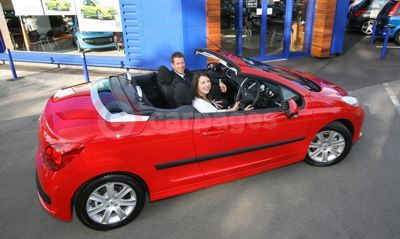 Saturday wasn’t England’s night; however, for one person in the packed Stade de France Stadium the celebratory mood could not be dampened. Jessica Wright won tickets to the final, along with a brand new Peugeot 207 CC as part of the manufacturer’s sponsorship of the 2007 iRB Rugby World Cup.

Jessica, from Brixton, entered the prize draw, whilst taking a test drive of a Peugeot 207 CC with her aunt at Robins and Day Peugeot, Clapham in July.  As a part of the Peugeot 207 Rugby World Cup prize draw, she won a brand new Peugeot 207 CC and a pair of tickets to see England and South Africa battling it out to win the Webb Ellis Trophy.

“I really didn’t expect to win,” said an excited Jessica. “I thought the car was fantastic after test driving it in July, and was very jealous when my aunt purchased one. I can’t wait to get out and about in mine; I just hope the nice weather continues so I can get the top down!”

Jessica was presented with her Flamenco Red 207 CC 1.6-litre HDi 110 Sport, in time to see England’s heroic performance against South Africa. “I was so excited about going to the final, and completely gutted for the England boys, they fought so hard against South Africa.”

Peugeot kicked-off its 207 Test Drive competition nationally in July and August, anyone who test drove a 207 was entered into the prize draw, 39 runners up received pairs of tickets to fixtures throughout the 2007 World cup campaign.

The Peugeot 207 CC is the UK’s leading small Coupe-Cabriolet and is available in showrooms now with a 1.6-litre petrol or HDi diesel engines with emissions from 136g/km CO2 (1.6-litre HDi 110 with DPFS model).

Peugeot 207 CC Images may not be UK specification cars. Colours and exterior and/or interior elements may differ from actual models.