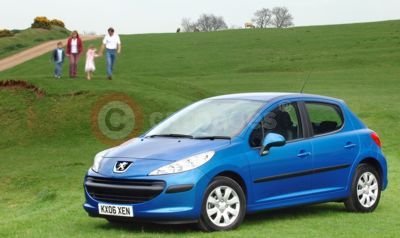 With satellite navigation sales growing year on year, this is clearly becoming a “must have” option. One option is a portable navigation device (PNDs). The issue, however, with these units is that their portability also makes them prone to theft and the use of an integral aerial can also affect their performance.

The inbuilt RT4 system, however, benefits from faster response times due to the use of an external aerial, greater integrated functionality and improved security as the unit is built into the car and does not have to be removed when the vehicle is parked to prevent possible theft.

The RT4 system has evolved from the original Peugeot RT3 system launched back in 2002 but uses the next generation technology with the use of an integral “automotive” specification computer hard disk (i.e. a disk designed to operate in an automobile environment) with a capacity of 30 GB. The use of a hard drive removes the need for CD ROM based mapping information and also enables a music CD to be played at the same time as operating the navigation system.

The key functions provided by the RT4 Multi-media system are as follows:

The new RT4 system integrates perfectly into the vehicle interior both functionally and stylistically. The system, like the current RT3, is a “4 in 1” device: it combines multiple audio and multimedia functions, with a hands-free GSM phone, local emergency call capability and a GPS navigation system.

The new RT4 system retains the intuitive operating logic of the original RT3 system as well as the ability to connect to a portable MP3 player via the external RCA/auxiliary sockets. These also allow - when the vehicle is stopped - the displaying of digital photos or films.

The RT4 system also has a voice synthesis and recognition system which makes it both practical and reassuring (especially for navigation and hands-free telephone use).

RT4 Multi-media system will be available in the following 207 models: SE Premium, GT, GTi THP 175, CC GT and SW Sport. It replaces the previous optional RT3 system in these models.

The RT4 Multi-media system costs only £995, a saving of £675 compared to the old RT3 option in the 207 hatchback and CC versions. In the SW version it is combined with the Comfort Pack option which includes: dual zone air-conditioning with climate control, fragrance diffuser and automatic operation of the dipped headlights and wipers, priced at £1,465.

The RT4 system will be available from December 2007.

The option price of ESP on all Peugeot 207 models has been reduced from £350 to £200 to improve yet further the already comprehensive levels of safety of the 207.