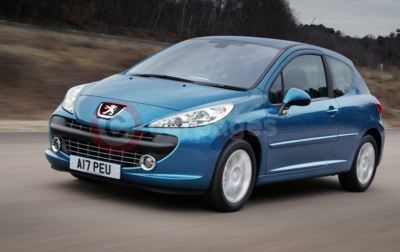 Both models will be powered by a new 1.6 litre 16v petrol engine designed in co-operation with the BMW Group and manufactured for both parties at PSA Peugeot Citroen Douvrin manufacturing plant.

Already seen in the BMW Group’s Mini Cooper, this engine will replace the current Peugeot 1.6 litre 16v 110 bhp engine in the 207 range.

Following on from the 1.6 litre 16v THP 150 turbo-charged (EP6DT) engine, the EP6 is the second engine created from the co-operation with the BMW Group. It has maximum power of 120 bhp at 6000 rpm and maximum torque of 120 lb ft at 4250 rpm. One of its strengths, however, is its very flat torque curve which, even at only 2000 rpm results in 103 lb ft, or 88% of its maximum torque being produced, giving excellent driveability.

This engine also sees the introduction of technology which is a genuine first for a vehicle in the B segment. In addition to a variable valve timing system for both the inlet and exhaust camshafts, there is also a variable valve lift system on the inlet valves allowing the maximum valve lift to be adjusted gradually according to the position of the accelerator pedal. The use of this technology removes the need for a throttle butterfly as the engine power is now controlled through the infinite adjustment of the inlet valve lift and intake valve opening times.

In a conventional engine the engine power output is controlled by means of a throttle butterfly. The required amount of air to be drawn into the engine is regulated by the position of the throttle butterfly; however, at certain engine speeds and throttle butterfly positions, the incoming air has to “squeeze past” the partially closed or closed butterfly, reducing the air flow into the engine. The overcoming of this “resistance” results in both a reduction in potential power and also reduces overall engine efficiency but, more importantly, an unnecessary increase in fuel consumption.

The introduction of this new engine will also see the first 207 automatic models introduced in SPORT and SE trim levels.

Available for the first time in the 207 hatchback range, a “Porsche Tiptronic System” automatic gearbox is now available with the introduction of the new 1.6 litre, 16v 120 bhp petrol engine. This electronically controlled “automatic auto-adaptive” gearbox has four speeds and an electronic control of the gearshift.

The Peugeot 207 sports new 120 bhp state of the art petrol engine…3 functions. The driver can also select either “sport” or “snow” operating modes. Ability for the gearbox to “lock-up” is present on all gears reducing internal friction and, therefore, reducing drag. The use of this system also reduces fuel consumption which remains quite close to that obtained with a manual gearbox.

Here, the innovation resides in the gear shift control which acquires a dual function: on the right-hand side, a gate with a PRND pattern and, on the left-hand side, accessible from the “Drive” position, a “Porsche Tiptronic System” with sequential control, offering the driver the possibility of “active” driving. In this position, by pushing the gearlever forwards or backwards it is possible to go “up” or “down” the gears. The system reverts automatically to first gear when the car comes to a standstill. Conversely, as the engine speed increases, it switches automatically to a higher gear before the maximum permitted engine speed is reached, in order to protect engine components.

The engine’s greater power output and increased torque gives significant improvements in driveability. The biggest gains, however, are the reduction in fuel consumption of 15% in the combined cycle and CO2 reduced to only 145 g/km with a manual gearbox.