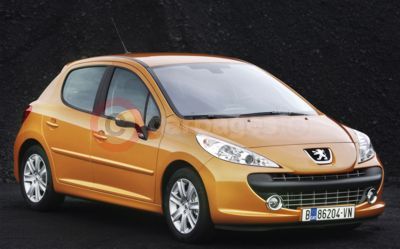 Peugeot announces the Peugeot 207, the newest member of the legendary 2 series dynasty, which has seen over 13.2 million cars produced since the launch of the 201 in 1929.

When the Peugeot 206 replaced the legendary Peugeot 205, nobody could have known what a success it was going to be. With over 5.4 million Peugeot 206s produced, it has become the best selling Peugeot ever.

The next chapter in the Peugeot 2 series is now here with the launch of the Peugeot 207. Continuing to build on the three key strengths of the previous models: visual appeal, strong personality and exemplary road holding, the 207 will succeed but not replace the 206.

Successor is the right word to describe the 207, as the 206 will continue its global career for many years to come and will soon be produced in eight individual production sites on three continents. The launch of the 206 Sedan at the 2005 Frankfurt Motor Show continues this momentum. The launch of a fourth Peugeot model into the B segment recognises that the choice of buying a small car has now evolved from choice by default, to a genuine preference. This evolution has seen a growth in the B segment of many different models, new concepts and multiple offerings from individual marques.

With an increase of more than 50% in its total world sales since 1998 and growth of more than 80% in sales of vehicles in the B segment, Peugeot is a leading player in the small car segment. With the 207, alongside the 107, 1007 and 206, Peugeot can now provide different vehicles for customers with differing profiles, many of whom have a high level of disposable income and also meet their differing expectations and needs.

The 207 will be available at launch as either a three or five door hatchback, but will be joined later by other body styles as the range evolves.

The 207 is based on Peugeot’s platform one, which it shares with the innovative Peugeot 1007 and was designed in house by Peugeot’s own stylists. The Peugeot 207 has a unique appearance with a blend of soft curves and bold contours which together, create an elegant car whose exterior style, however, still retains a recognisable visual link to the Marque’s other vehicles.

At launch, the 207 will be available with a range of six engine options with a five speed manual gearbox on all versions.

The 207 will also see the introduction of a number of new innovative features, such as static directional headlamps, which make it easier to identify a pedestrian about to cross the road when driving in town, or a cyclist riding at the side of the road.

The availability of a fragrance diffuser will make the 207 the first Peugeot vehicle to be available with this feature. It is discreetly incorporated into the fascia panel, and diffuses a chosen scent into the passenger compartment. Seven individual fragrances will be available and all have been specially developed by a leading French perfume supplier.

Safety is a key Peugeot strength and the 207 will not disappoint, with six airbags fitted as standard. The 207 also borrows from the 407 the use of two front impact absorption structures. These structures distribute impact energy more efficiently in the event of a collision and also enhance repairability and pedestrian protection.

The structure of the 207 has been designed to resist impact levels even more severe than those of regulatory or Euro NCAP tests. The 207 is also one of the first vehicles to be designed to meet the requirements of the new European directive concerning pedestrian impact protection.

The 207 will see many future developments over the coming years, including innovations in terms of high-tech engines and equipment (Stop and Start), new body styles etc….. Before the end of 2006, two new engines developed as part of the partnership between PSA Peugeot Citroen and the BMW Group will make their first appearance in the 207.