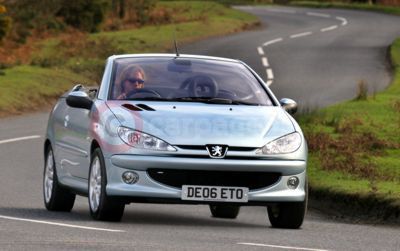 With water shortages and hosepipe bans affecting large parts of the country, farmers and gardeners may be eagerly looking at the weather forecast for 15 July and praying for rain. For legend has it that if it rains on that day, the feast of St Swithin, it will rain for the next forty days and nights.

The UK’s many convertible drivers, on the other hand, may be hoping this Saturday remains dry, but come rain or shine it seems the nation’s love affair with open-topped driving will continue to flourish.

Peugeot remains the top selling convertible supplier in 2006 to date, having sold a combined 20,000 307 and 206 CC (coupé cabriolet) models in the first six months of the year. The stylish 206 CC continues to be the best selling B segment convertible car with an electric folding metal roof - allowing you to go from a 2+2 coupé to an open-topped convertible in just 20 seconds should St Swithin prove to be against us, and providing the added safety and security, compared to a soft top.

Peugeot has always been a leading player in the convertible car market. It was a Peugeot 401 Eclipse back in 1934 that became the first car in the world to be fitted with an electric retractable roof system, using a design which was patented in 1932.

Launched in January 2001 the 206 CC was the first car to bring the electric folding metal roof to the volume car market at an affordable price. So successful has been the Peugeot 206 CC with over 350,000 models already produced, that it has been joined by a whole host of impersonators. The 206 CC, however, continues to out sell all its "metal" folding roof competitors with over 9015 vehicles sold in the UK already, from January to June 2006.

If you fancy making the most of the summer with some open-topped driving, there’s no better time than now to drive away with a good deal. Peugeot dealerships are currently offering a year’s free insurance* on the 206 CC until the end of September 2006.

The model is also economical to run and operate with the 206 CC HDi 110, for example, returning over 57.6 mpg for the combined drive cycle, with CO2 emissions of only 129 g/km (£110 vehicle excise duty). The 206 CC HDi 110 also protects the environment as it is fitted as standard with a diesel particle filter system (DPFS) - resulting in no sooty emissions, so cleaner air for all of us.

Also, all Peugeot HDi diesel engines are also capable of running on up to 30% biofuel, with absolutely no alterations needed. Biofuel, or biodiesel, is made from a combination of fossil-fuel based diesel blended with fuel made from renewable sources, such as certain crops - which are not only sustainable but also release less harmful emissions when burned.

Peugeot 307 CC Images may not be UK specification cars. Colours and exterior and/or interior elements may differ from actual models.