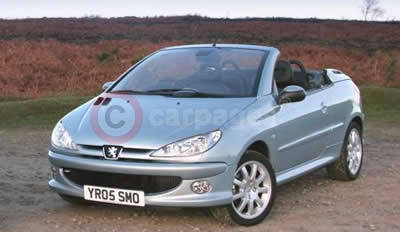 Since its introduction in 2001 the Peugeot 206 CC has won the hearts of more UK convertible buyers than any other model. It has remained the number one selling convertible car in the UK for three consecutive years (2002 to 2004).

In 2004 8,848 vehicles were sold making it again the top selling convertible car in the UK. Due to this success the coupe-cabriolet now represents nearly 10.2% of total 206 registrations in the UK (9% in Europe).

With worldwide sales of almost 300,000 vehicles and UK sales of 35,329 vehicles since launch the 206 CC continues to go from strength to strength.

This successful formula, however, will not stand still in 2005. The Geneva Motor Show will see the first public appearance of an all new 206 CC powered by a 1.6 litre HDi diesel engine producing 110 bhp.

Following in the footsteps of the 206 GTI HDi 110, the 206 CC HDi is also fitted with Peugeot’s diesel particulate filter system.

The current 206 CC range is available in three trim levels with either a 1.6 or 2.0 litre petrol engine and an automatic gearbox option on the 1.6 litre is available.

Peugeot 206 Images may not be UK specification cars. Colours and exterior and/or interior elements may differ from actual models.