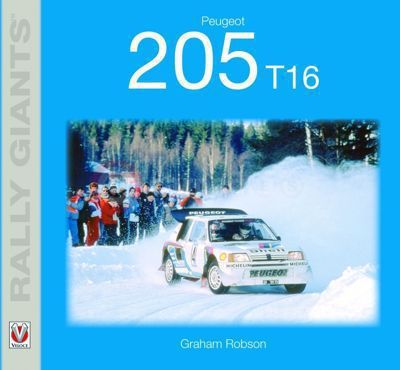 Full detailed history of the 205 T16's rally career.
Concept, design and development.
The people, including the main characters and influences behind the cars.
Step-by-step coverage of technical evolution.
Description of cars: why, how and when.
Packed with pictures, not only of cars in action, but of the people involved.
Comparison with rivals H Complete listing of important successes and ‘works’ cars.

Four-wheel-drive was authorised in rallying from 1979, but for a time no serious car manufacturer even tried to harness it to their cars. It was Audi which produced the world’s first rally-winning four-wheel-drive car – the Quattro, although it was Peugeot which designed, developed, campaigned and won with the first truly sophisticated four-wheel-drive Group B Car – the 205 Turbo 16: a truly great, purpose-designed Group B car. Determined to win at almost any cost, Peugeot hired Jean Todt (who would later transform the fortunes of the Ferrari F1 organisation) in 1981, and set him an ambitious target: his dream car had to be running in 1983, homologated in 1984, and capable of winning World Championships by 1985. Packed with illustrations, technical details, facts, figures and successes of this innovative car, this exciting book is a must for any rally fan.

Graham Robson possesses a worldwide reputation as a motoring historian, and has been close to the sport of rallying for many years, as a competitor, team manager, organiser, reporter, commentator and observer; in more than forty years he has never lost touch with the sport. Not only has Graham competed in many British and European events, he's also reported on marathons in South America, and acted as a travelling controller in the legendary London-Mexico World Cup Rally.   As a recognised authority on many aspects of classic cars and motoring of that period, he is the most prolific of all authors, with more than 120 published books to his credit. Over the years he has owned, driven, described and competed in many of the cars featured in this Rally Giants series, and his insight into their merits is unmatched.