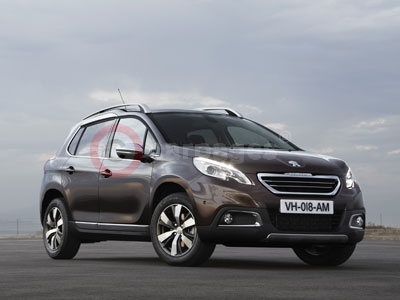 The Peugeot 2008 Crossover builds on the success of the new 208 - order books will open in May and it is officially on sale later in the summer of 2013. It is targeted at buyer of cars such as the Nissan Juke and Vauxhall Mokka – and should be competitively priced to target these buyers, so expect prices to start around £13,000.

The 2008 won’t be featuring all-wheel-drive instead it is front-wheel drive with the option of Peugeot’s Grip Control system which has Standard, Snow, Off-Road, Sand and ESP Off modes. It is designed to offer maximum traction in all conditions including off-road but the 2008 is not really designed for serious off-road use.

At the launch the Peugeot 2008 will be available with five petrol engine variants and four diesel units.

The Peugeot 2008’s engine range will be extended at later date with versions of the turbocharged three-cylinder petrol engine, with two power outputs available: 1.2-litre e-THP 110 and 1.2-litre e-THP 130.

Options include alloy wheels in 15”, 16” and 17”, plus a range of transportation solutions, which include a towbar which can be removed without tools, plus secure roof bars to accommodate a bicycle carrier, ski carrier or roof box.

This is a 8-year+ news article, from our Peugeot archive, which dates back to the year 2000.

If in doubt check with your local Peugeot dealer as car prices and technical data will have changed since 2013.

Peugeot 2008 Images may not be UK specification cars. Colours and exterior and/or interior elements may differ from actual models.