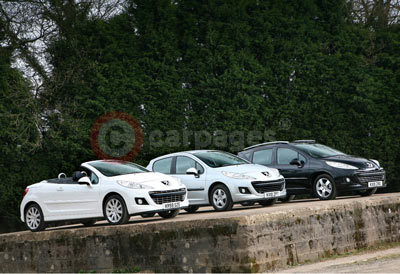 Peugeot's "2-series" cars have always been a key model for the Marque and provided owners with access to a range of innovative technology not normally found on this type of car.

With Peugeot celebrating its 200th anniversary, it is no coincidence that the "2-series" cars have played a strong role in the success of the company, from the first Peugeot 201 to the current Peugeot 207.

It was in 1930 that the first owners were able to drive away in the new Peugeot 201 saloon, which was the first car to use Peugeot's current model numbering system and the first mass produced car in the world to be fitted with independent front suspension. In 1938, Peugeot unveiled the 202; unfortunately, with the outbreak of World War II production was interrupted but it was the Peugeot 202 that restarted Peugeot's production in Sochaux after the war.

At the Paris Motor Show in 1948, Peugeot unveiled the 203, its first totally new post-war car and again this car benefited from a range of technology not normally found in this market segment. To ensure maximum engine efficiency, the Peugeot 203's engine benefited from the use of a hemispherical combustion chamber and inclined valves with a centrally mounted spark plug. This design ensured the engine was as fuel efficient as possible - a strength which remains in all the current Peugeot 207 engines to this day. The Peugeot 203 was also Peugeot's first car to have a modern body shell design rather than a separate chassis.

With the motor industry in recession during the early eighties, it would be another "2-series" car which would capture the hearts and minds of the world's car-owning public, the Peugeot 205. Launched in 1983, the Peugeot 205 would become in its many guises the first Peugeot "2-series" vehicle to sell more than 5 million examples.

The success of the Peugeot 205 would lead to Peugeot designing the now legendary Peugeot 206, the best selling Peugeot car ever. Its cheeky good looks, practicality and fuel efficient engines ensured the 206 was a big hit around the world and, especially, in the UK. Like previous "2-series" models, it introduced owners to a range of technology not previously available in its market segment - multiplexed electrical systems for greater reliability, the first electric folding roof on a mass produced car - the Peugeot 206 CC - the 120g/km Peugeot 206 HDi eco to demonstrate Peugeot's commitment to the environment, the standard fitment of a diesel particulate filter system to reduce particle emissions and the introduction of the first full length glass roof on the Peugeot 206 Roland Garros.

With this strong heritage to call upon, the current "2-series" car the Peugeot 207 has evolved into the perfect combination with all the special Peugeot "2-series" DNA. Available in three body-styles - hatchback, SW and CC - the Peugeot 207 perfectly matches the needs of modern families or individuals who need a fuel efficient, versatile and stylish compact car.

The range starts with the three or five door hatchback model powered by a range of class leading petrol and HDi diesel engines with CO2 emissions from 99 to 159 g/km.

Next, the spacious and versatile Peugeot 207 SW provides increased load capacity, class leading practicality, unbelievable interior ambiance due to the full length glass roof and a level of driving enjoyment not normally found in a small "estate" car. It is available with a choice of two petrol engines and two diesel engines.

For lovers of "wind-in-your-hair" driving, there is the Peugeot 207 CC Coupe Cabriolet which builds on all the strengths of the Peugeot 206 CC and is available with three different engine options, and an HDi diesel model which qualifies for zero vehicle excise duty.

Efficiency, whether in driving dynamics or engine efficiency, has always been a strength of the Peugeot "2-series" models. The Peugeot 207 is the king of them all with 26 models in the range qualifying for zero vehicle excise duty and all models benefiting from Peugeot's extensive knowledge of vehicle dynamics.

All Peugeot 207 models registered in June 2010 come with a free Nokia 5230 smartphone with inbuilt satellite navigation with free future updates and an in-car mounting kit.