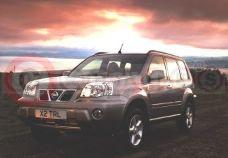 Nissan is adding a 165PS 2.5-litre petrol engine to its award-winning X-TRAIL range of compact 4x4s. It’s being launched at the British International Motor Show before sales kick off in January 2003.

Like every X-TRAIL, the 2.5 has an electronic – so faster reacting – four-wheel drive system known as ALL MODE 4x4 in Nissan-speak. It offers a choice of three press-a-button modes including front-wheel drive only for in-town pootling. The keener driver will select the AUTO setting for maximum security (and fun) on-road as well as traction for the 10% of time the car goes off-, while mode three is LOCK which predictably locks the drive front and rear for more serious cross country adventures. And for a better view of the wilderness, the 2.5 retains the usual X-TRAIL electrical glass tilt/slide "sky" roof – no competitor’s will open wider. Say, "ahhh".

Which brings us neatly onto equipment. We could save time and say about the only thing the SVE lacks as standard is satellite navigation system, an option for £1500, but seeing as the alternative is to discuss the engine’s technical specification let’s dwell on the standard features list for a bit longer.

The 2.5’s seats are covered in leather that’s as practical as it is luxurious and front mounted bottoms can be lightly toasted or deep fried by standard heaters. Leather also gets wrapped around the steering wheel rim and gear lever, meanwhile the electrically adjusted and heatable door mirrors will glide away on demand, the centre console incorporates an adjustable armrest and audio controls are mounted on the steering wheel to also manage the in-dash 6CD autochanger.

There are plenty of airbags to explode in the event of an accident which hopefully will be avoided due to the standard anti-lock brakes with electronic brakeforce distribution and brake assist. A rather more pleasant discussion topic is can-holders, of which the 2.5 has two – both air conditioned via the standard electronic cabin climate control. Unusually, the X-TRAIL’s instruments are centrally mounted which neatly frees up the space behind the steering wheel for a lidded box that will hold enough CDs for a 24 hour rave and also hides a 12V power socket for discreet mobile recharging.

Ever wondered why car boots come covered in shagpile better than you find in the average living room? So did Nissan which is why the X-TRAIL’s boot is upholstered in a ribbed, tough plastic. You can wheel in a mountain bike whole without having to wash off its wheels. Or throw in a Sunday’s worth of cleared vegetable patch and speed it straight to the tip. Afterwards, one wipe and the X-TRAIL’s boot is restored to a clean state. Marvellous. And if any mud ends up on the X-TRAIL’s flanks during the tip trip, it won’t find its way onto trouser legs come Monday’s return to work because the X-TRAIL’s doors take the sill with them as they open. You even get a fold-down flap in the (reclinable) rear seat back large enough to take his ‘n’ hers snowboards. Or more likely some planks of wood destined for spare bedroom shelving.

All its bodily bits are either chromed or colour-coded except for the 16" alloys which remain the same easy-to-clean five-spoke design. In fact, Nissan has taken the discrete route to visually denote the 2.5 with not a power bulge or in-yer-face stickerage to be seen – the only thing that distinguishes it from the existing SE+ is a boot mounted SVE badge. However, Nissan dealers will happily apply a wide array of ribs and bars to any X-TRAIL for those wanting to look a little more forbidding in the weekly fight for a supermarket parking space.

Another option is four-speed automatic transmission with which the 0-62 mph time changes to 11.1 seconds. That’s two seconds quicker than the current 2.0-litre auto. And at 232 g/km, the 2.5 auto’s CO2 emissions figure is also (surprisingly) better as is its average fuel consumption – 29.1 mpg. For the record, the 2.5 manual is rated at 230 g/km which, to save you looking it up, puts it in the 28% BIP banding for the current tax year.

Just in case you’re wondering how Nissan suddenly managed to magic up a 2.5-litre engine, it’s new only for the UK. The unit has been offered in Asian market Primeras and X-TRAILs for a wee while now and in the USA powers the groovy Altima saloon. It’s essentially a fatter version of the existing 2.0-litre unit over which the 2.5-litre has a 25 PS advantage delivered at the same 6000 rpm. There’s a total 230 Nm of torque (up 38 Nm) at 4000 rpm to pull with – all the better for a manually transmission-ed X-TRAIL 2.5 to lug around a braked trailer of 2 tonnes. This makes it as capable around a caravan site as an X-TRAIL 2.2-litre diesel and 500 kg more so than the 2.0-litre petrol. And yes, Nissan dealers do offer a lovely towbar.

The 2.2-litre diesel gets a bit of end of year action, too, with the SE+ being reborn as the SVE in line with Nissan’s new and more sensible pan-model grading structure. Secondly, the unique-in-class ESP+ system is now available as an option on the diesels priced at £750. Anyone fluent in automotive acronyms will know this stands for Electronic Stability Programme. But the "+" sign means that the X-TRAIL’s system is able to cleverly integrate the anti-lock brakes and electronic brakeforce distribution with an active brake limited slip differential and the ALL MODE 4x4 system. Which translated means greater on-road stickability and off-road mobility.