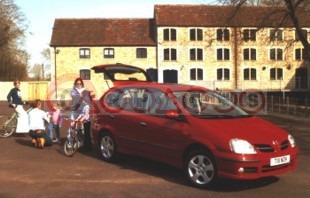 Nissan’s compact MPV, the Almera Tino, is being changed from the inside out with new diesel engines, one being the most powerful available in this type of car, and added technology including electronic climate control across the range. A rear parking camera and DVD satellite navigation are also now available on the Almera Tino – but not on any rival. The range has been simplified, the equipment tallies boosted yet prices still start from under £13,000.

Family friendly transport is the aim of the compact MPV and the Almera Tino is designed to appeal to adults and children alike. And particularly the driver in the Almera Tino’s case which is why a revised engine line-up is central to this round of revisions. Compact MPVs and diesel engines go together like Harry and Potter … or Common and Rail which is what the revised Almera Tino offers, in a choice of two power outputs. The engines are a development of Nissan’s 2.2-litre turbodiesel, now carrying the dCi moniker to signify their newly common railed status and with either 112 or 136PS. The latter is the most powerful diesel engine currently offered in a compact MPV. So powered, the Almera Tino will accelerate to 62 mph in 10.5 seconds yet still returns 42.8 mpg on the combined cycle. Predictably, the 112PS version does even better returning 44.1 mpg.

There used to be two petrol engines offered in the Almera Tino. Now there’s just one and it’s a 1.8-litre unit as before but with more power (115PS up from 114) and torque (163 Nm up from 158) for better performance, fuel economy and even CO2 emissions – the BIK banding for this version falls to just 18%. The 2.0-litre CVT has gone, a victim of economics, to be replaced by a four speed automatic boxed 1.8-litre that’s not only much more affordable but also a lot less punishing on a company car driver’s pay packet – CO2 emissions drop from 223 g/km to 199.

Nissan has also been making advancements in dashboard design with a driver control layout first seen on last year’s new Primera which aims to reduce the ever increasing number of switches. It’s called N-FORM and has since been incorporated into the Almera’s design. Now it’s the Almera Tino’s turn.

A colour screen is used to display climate control, CD radio and trip computer information which are operated by 16 large and easy-to-understand switches mounted below. Top-of-the-range models have DVD satellite navigation fitted as standard and this is operated through the same layout – the only change is that the display screen grows to 7 inches. That same screen doubles as the rear parking camera display, as it does in the Primera. The rest of the Almera Tino’s interior has also had something of a makeover with a much smarter look so it’s suited for any family occasion. Or member.