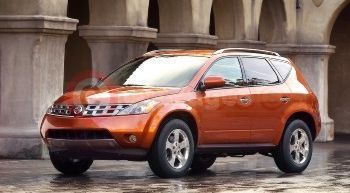 Imagine if Nissan put a 350Z into the mix and added rear seats, five doors, a higher body and four-wheel drive … Well, it has. The result is called the Murano after the famous, sculptured glass from Italy and is sure to be one of the smash (get it) hits of The Sunday Times Motor Show Live. The only wilder looking 4x4 making its UK debut at the show will be Nissan’s QASHQAI concept. The Murano is confirmed for sale. The QASHQAI isn’t. Yet…

The Murano is the size of a BMW X5 yet will cost less than an equivalently equipped X3 when it goes on sale early next year. It takes the 3.5-litre V6 engine from the 350Z, combines this with the X-TRAIL’s electronic four-wheel drive system, and adds the toughness and versatility of the Patrol. In the US where 5000 are sold every month, it’s the Murano’s knock-out styling that has really grabbed people’s attention. The Murano’s designers say it looks like "sculpture in motion". Whatever. The Americans simply say it’s hotter than a San Francisco sidewalk in summer.

Park a Murano next to a 350Z and the relationship is obvious. And it’s not just about big 18" alloys pushed to the extremities of the car. There are similarities in the lights, too. The relationship under the bonnet could not be closer with both sharing the same 3.5-litre V6 engine, detuned marginally in the Murano to around 240PS. The Murano gets its own automatic transmission, Xtronic, with a selectable manual mode and when the going gets wet or slippery, the electronic four-wheel drive system anticipates any loss of traction to react much faster, diverting torque as necessary. For the really rough stuff, there’s a LOCK facility to even the torque front and rear as well as Nissan’s ESP+ system for added traction. The Murano is made on one of Nissan’s car platforms, not an off-road one and, if the American road test reports are anything to go by, it’s a great handling SUV. It’ll be even better by the time it lands here as we’re getting specially tuned suspension.

The advanced theme is carried over to the interior design. And for once, a car’s big dimensions are translated into a big space for passengers, cargo and general stuff. There are storage holes everywhere with the two-tiered lockable one between the front seats big enough for a laptop. The ‘floating’ centre console adds a sense of space to the reality and houses the standard DVD satnav. Another neat feature is the remote flip-down rear seats. And the instrument binnacle moves with the steering column as it’s adjusted just like it does on a 350Z.

Unlike other premium SUVs, the Murano doesn’t come with an options list as long as the M40. So Nissan won’t be asking Murano customers to pay more for 18" wheels, xenons, leather, DVD satnav, rear parking camera, darkened ‘celebrity’ style windows or a thumping Bose 7 speaker audio system because like the 350Z, the Murano will be great value for money. And just as rare. But although volumes will be limited, Nissan is expecting the Murano to make a lot of noise at the motor show … not of broken glass, hope the organisers.

Nissan Murano Images may not be UK specification cars. Colours and exterior and/or interior elements may differ from actual models.