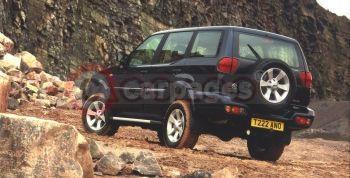 The Nissan Terrano is one of only a few no nonsense 4x4s that’s equally at home ploughing across a muddy field as it is filled with family cruising down a motorway. Now Nissan is adding a new Sport to its Terrano game that looks as tough as it is.

On sale from January, the Terrano Sport comes in two different powered versions both with five-doors and seats for seven. The more affordable is the 2.7TD at £22,295 but for another £1000, there’s the option of Nissan’s hugely torquey 3.0Di engine which also motors along the mighty Patrol GR and brings with it the ability to tow up to 3 tonnes. In terms of caravan, that’s practically a house.

The Sport pack adds £700 to the price of an equivalent SE. Yet Nissan has thrown in £1500 worth of extra stuff. Starting from the outside in, the Sport gets fully body-coloured bumpers, side mouldings and wheel arch extensions in a choice of metallic Cayman Blue or Starburst Silver. It also gets headlamp washers to ensure a clear view ahead during night-time forages off road.

The biggest Sport addition, literally, are the new six-spoke 17" alloy wheels – up an inch on usual Terrano issue. They’re attached to the road or dirt track by grippy 235/65R17 dual-purpose tyres that are as much about show as they are faster go. There’s one item, though, that’s disappeared from the SE specification: a cover for the tailgate mounted 17" spare wheel. In Nissan’s opinion, if you’ve got it, flaunt it. But you won’t be able to nick it because the wheel is attached with locking nuts.

Unlike the Terrano SE, all the seats in the Sport (including the removable third row that gives the Terrano seven seating capability) are upholstered in Alcantara and silver-stitched leather. For those who don’t know Alcantara from Aladdin, it’s a man made suede that stays warmer in the winter than leather yet can still be wiped clean should a post-walk, excitable dog decide to redecorate the interior with muddy paw prints. And like suede, Alcantara also feels rather good when stroked by human paw. The front seats gain tray tables on their backs for 2nd row passengers to eat their lunch off and the dashboard gets anthracite effect trim. The overall interior look is more modish than the SE’s. And with the reupholstered seats, the Sport is even more practical when rain drenched families want whisking home.

All the other features of the SE are retained by the Sport. So it has, for example, aluminium side steps, leather steering wheel, air conditioning, anti-lock brakes with electronic brakeforce distribution, active front seat headrests, side airbags, electrically heated and adjustable door mirrors, load floor and tailgate storage nets, and a CD radio with steering wheel mounted audio controls.

The Sport is also equipped with selectable high and low ratio four-wheel drive giving it almost go anywhere off road ability. And in town, the Terrano’s more compact dimensions compared to its often gargantuan rivals make it less of a neck spin to manoeuvre.

When it comes to direct rivals, the Terrano actually doesn’t have many since traditional, no nonsense 4x4s are a rare breed – think Isuzu Trooper, Mitsubishi Shogun Sport, Toyota Land Cruiser or even the Land Rover Defender 110. Buyers also come from MPVs like the Ford Galaxy when it’s time for something a little more high rise. But a lot of Terrano custom also come from the Terrano as it has one of the highest loyalty rates of any 4x4. Because on every level or unlevel, the no nonsense Nissan makes a lot of sense.