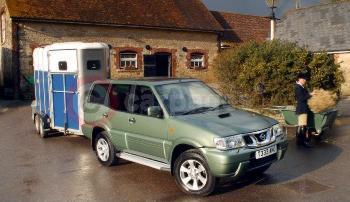 Nissan has taken a giant pair of shears to its well-established Terrano range to simplify the line-up, improve specs, and in most cases cut prices to ensure another successful crop in 2004. This means Nissan can rightly claim that the Terrano is the best equipped, seven seating, 4x4 that’s able to tow 2.8 tonnes available for under £21k. Because it’s the only one.

Unlike some, Nissan has always been quite honest about the number of nose-jobs its Terrano has had. But this time, the car’s been spared the chrome surgeon. Instead it’s bye to those hangovers from the 90s, fake wood and two-tone paint, and no revival tour is planned. The new six-spoke 17" alloy wheels have a high glossfinish and the dashboard gets a titanium coloured centre strip. Monotone metallic paint is now available in five shades, two of which are new for 2004 and if you really must, two-tone is now a no-cost option on the SVE. The interior has a colour make-over, too, with black being the new tan. And that includes the leather fitted as standard to the SVE.

The Terrano has been carefully cultivated over its 10 year history. And to good effect as almost half a million have been sold across Europe. It’s still selling well: 2003 was an even better year in the UK for Terrano than 2002. This could be because it’s more highly equipped than ever and is one of the few remaining choices for anybody needing a no-nonsense, four-wheel drive tow-truck come workhorse come family wagon.

For no nonsense, read a ladder frame chassis for strength and rigidity. Generous ground clearance, high or low ratio four-wheel drive and a limited slip differential make the Terrano near unstoppable off-road. The 3.0-litre manual will tow three tonnes of braked trailer helped along by its 304Nm torque output and as much as 786kg can be loaded inside the 2.7TD three-door. Or there’s up to 1900 litres of available boot space in the five-door. If it’s your family filling some of that, you’ll be happy to hear that all Terranos have ABS with electronic brakeforce distribution, side airbags and front-seat active head restraints. Every Terrano has air conditioning, electric windows and door mirrors, an alarm system, side steps for easy access, a CD with steering wheel mounted audio controls, load luggage net, and in the case of the five-door, a removable third row bench seat. The SVE adds an electric glass sunroof, roof-rails, leather upholstery, a CD autochanger, heated front seats and headlamp washers. A towbar is optional though a Terrano looks naked without.

Nissan Terrano Images may not be UK specification cars. Colours and exterior and/or interior elements may differ from actual models.