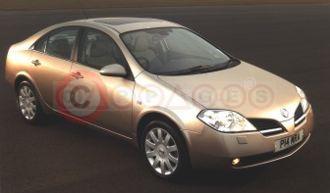 Nissan has dropped the price of all Primera diesel models by £500 and improved the specification of the S grade, the latter at no extra cost. And these aren’t just temporary offers – they’re permanent.

Diesel will literally fuel much of Nissan’s marketing efforts in 2003 with the company determined to increase its share of this growing sector. And bringing down the price of all Primera diesels is the first stage in the plan. Now the premium for the six-speed 2.2-litre Di engine is only £500 over a 2.0-litre petrol instead of £1000 as it was previously. Combine the lower price with an average fuel consumption of 47.9 mpg and a Primera Di now makes even more financial sense – particularly, with its current 18% BiK tax banding, for the business user.

The Primera’s 2.2-litre engine is a modern, common rail unit and at 126PS is more powerful than most rivals’ equivalent engines. A four or five-door 2.2Di SVE equipped with DVD satellite navigation system, rear view camera and integrated mobile phone system is now £18,000. Or go lower down the range and a 2.2Di S can be driven away for £15,600 – this grade is now better equipped, too.

Nissan has been surprised that the mix of Primeras it’s been selling here has been so "rich", marketing speak for buyers wanting the posher models in the range rather than the S. In fact 30% of Primeras sold so far have been SVE or T-spec models, no wonder given these come with standard DVD satellite navigation systems, with the bulk of the remainder being SE models. Nissan isn’t complaining. But it wouldn’t mind selling more S grade Primeras. (Without selling any less SE, SVE or T-specs…) So it has added the SE’s colour display monitor to the S grade which makes better use of the Primera’s innovative N-FORM dashboard layout. And rear electric windows. Without any increase in price.

The 1.8 S in four or five-door form still costs £14,600. And in addition to the extra features mentioned above, it still has electronic climate control, a CD player, 16" wheels, anti-lock brakes and six airbags. The 1.8-litre engine is particularly good to the environment with a CO2 emissions figure of 177 g/km. Which if we’re being selfish, means it’s also rather kind to a business user’s tax bill slotting into the current 17% BiK banding.