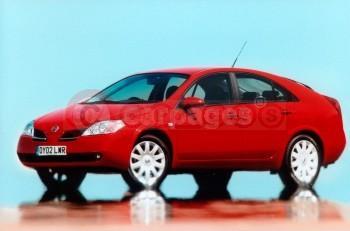 The most important Primera of all, the five-door, goes on sale 17 June at the same prices as the saloon which has just won the editor’s special award at the Fleet World honours.

The five-door is British born and bred: its finned rear was styled at Nissan's technical facility in the Midlands and will be produced at the company's Sunderland factory for sale only in Europe.

Hitting the showrooms at the same time are 2.0-litre six-speed manual versions of the saloon, estate and, of course, the hatchback. The hatchback range starts from £14,600 with the Primera 140 PS 2.0-litre priced from £15,100.

When the full range is available, 80% of Primeras sold in the UK will be hatchbacks. So its debut is an important one in a market which, in this age of Changing Rooms and Ground Force, prefers the versatility of a fifth-door. This hasn't stopped the Primera saloon, though, finding many a fan since its March introduction – not least for the car’s bold styling. The hatchback shares this extrovert look, being identical when viewed from the front. At the rear, though, Nissan's UK design team has given the hatchback a style all of its own … the fin is back. But Nissan’s designers aren’t saying if their inspiration came from British sportscars of the 1960s or from the dolphins that swim alongside the Primera in the television ads.

It's the way the rear lights are fashioned that's so unique. Three overlapping circles take care of the usual illuminations. However these are housed in a clear, red-tinted lens that's been pinched to form a fin. The rear window has a U-shaped lower edge which Nissan could claim is to improve rear visibility ... except that most of the Primera range has a rear view camera as standard so that's not really an issue. No, the window's shaped the way it is purely for styling's sake.

At 4567 mm long, the five-door is the shortest car in its class – except for the same length Primera saloon. But that doesn't make it small inside not least because of a wheelbase that's 8 cm longer than the outgoing model. And the new Primera, whether you're talking four- or five-door, is taller than any rival making the view from the driving seat almost MPV-ish. It’s stating the obvious but the Primera hatchback’s hatchback increases versatility – the rear door opens up 460 litres of luggage space with the back seats and parcel shelf in place, enough to easily swallow an Ikea trolley load of assorted household accessories.

The range of five-door Primeras is as extensive as the saloon’s. To which can now be added the 2.0-litre six-speed manual, the technical specification for which follows at the end of the release. Trim levels range from S, through SE and SVE (both available with a no-cost-difference choice of very different interior trims) up to the T-spec which Nissan reckons is the most feature laden new car on sale in the UK for less than £20,000.

The specification of the Primera hatchback is as futuristic as its styling. Take the 1.8 SE, expected to be the most popular of all Primeras both with people buying with their own hard earned cash and also with company car drivers, especially as the 1.8-litre engine’s 177 g/km CO2 emission rating slots it into the 17% BIK banding for the ’02 tax year. The 1.8 SE is priced at a reasonable £15,600 yet comes with all this lot as standard kit:

Nissan has broken the rules inside the Primera. Below the car’s centrally-mounted instrument panel is a unique command centre known as N-FORM which was specially developed for ease of operation and sited to fall readily to hand. As a result, there are 50% less switches on the dashboard than an equivalently equipped rival. Less visual information is needed to find the required control with the buttons designed for instinctive use. The same thinking went into the central positioning for the instrument cluster – the driver’s eyes need move only 25 degrees from looking at the road to glancing at the speed the car is doing, compared with 35 degrees when the dials are sited in front of the steering wheel.

Nissan’s unique approach has allowed all controls for audio, driver information, communication, DVD navigation and climate systems to be packaged into one electronically managed keyboard. The information is displayed on a monochrome screen on the Primera S and a larger colour screen on SE, SVE and T-spec versions. On these models, the screen also acts as the display for the rear view camera – put the car in reverse and a small camera positioned above the rear number plate shows the driver what’s hiding behind whether it be another car or a pair of legs. A cluster of six buttons is centrally aligned below the display. These are graphically reproduced on the screen and change function according to the menu selected. Two large circular switches operate the most frequently fiddled-with functions, the in-car entertainment and climate control. A joystick controls the navigation system.

Every Primera SE, SVE and T-spec will come with standard integration for the driver’s mobile phone. Developed with Nokia but suitable for the majority of modern mobiles, the phone is simply slotted into a cradle between the two front seats. Calls can be made or answered using the central console controls and the car’s audio system. The facility is not only convenient; it’s also a boost to safety.

The SVE and T-spec models come fitted with satellite navigation that adds the power of DVD mapping. This takes Nissan’s acclaimed Birdview™ navigation (which does as the name suggests giving a bird’s eye view of the landscape ahead) a stage further being quicker to program and to react. DVD technology also means that most of the European road network can be contained on one single disc. The system is fully integrated into the car’s diagnostics system meaning that should you run low on fuel, Birdview™ will navigate to the nearest fuel station.

There’s more intelligence, literally, in an optional feature available with the 2.0-litre engine labelled Intelligent Cruise Control or ICC for short. Unlike conventional cruise control, ICC uses a laser mounted at the front of the car to detect the presence of vehicles on the road ahead. Working through drive-by-wire throttle control, the engine management and the braking system, ICC is able to make automatic and smooth adjustments to the car’s speed so that the driver neither needs to change speed manually or disengage the system. That’s less fatiguing for the driver and improves fuel economy. ICC even allows the driver to input a choice of three distance settings.