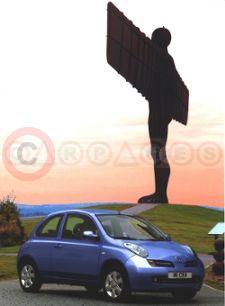 Nissan has announced that its new UK built Micra, which has already been rated as one of the best small cars ever by some motoring journalists, will be priced from £7495 for the 1.0 E three-door. And disproving the theory that the best things come to those who wait, the new Micra will be available rather sooner than expected.

Instead of 23 January, the new Micra will now be hitting UK streets from 15 January. Nissan has made the change to its corporate diary because people want this car. And as soon as possible. 9000-ish asked for information at the Birmingham International Motor Show and more interest is expected with the launch of a dedicated website (www.nissan-micra.co.uk ) and from the fantastic press the car is already receiving. The buzz has prompted Nissan to enable eager punters to pre-order their Micra even before production starts at Sunderland on 29 November. That’s a first for Nissan. But then there’s never been a small car as clever as the new Micra.

To save you working it out, the Micra range is topped by the £11,695 1.4 SVE five-door automatic. Amazingly, that’s more affordable than the less well equipped, less powerful, less roomy and less able outgoing Micra 1.4 SE+ five-door auto. May it rest in peace.

Although the top price for the Micra range has gone down, no doubt somebody will point out that the entry price has increased. Which it has. But then so has the equipment tally. Every Micra now has twin airbags, electric power steering, a CD player, electric windows, remote control central locking, a 65 PS engine, and anti-lock brakes with electronic brakeforce distribution and Nissan Brake Assist. All these extra goodies are easily worth more than the £245 increase in start price in even the stingiest valuation. And that’s not counting the new Friendly Lighting system which illuminates the driver’s way home at night after the engine’s been turned off. Or the Battery Save feature that makes it impossible to leave an interior light on by mistake. Or other ideas designed to make life easier such as the bubbles on top of the headlights that help the driver pinpoint where the front of the car ends. The Micra also has the smallest turning circle in its class - 9.2 metres or as close to that of the legendary London taxi as a car can get, guv’nor. And the biggest glovebox at 13 litres which if measured in wine, would be a stonking hangover. All for £7495 with three-doors or £7995 with five.