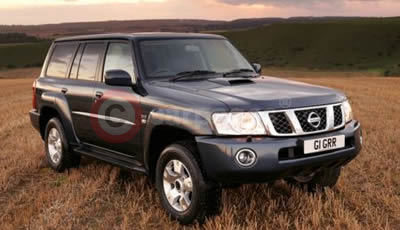 Many 4x4s are getting softer but not the Nissan Patrol. For the latest version that goes on sale at the end of October, Nissan has stayed true to the principles that created the first Patrol over 50 years ago. There’s a new look outside and in, plus greater power and torque. But the Patrol is still as tough and unstoppable as ever. And at prices starting from £24,500, no other new car offers as much metal for the money.

The Patrol has never been one for pottering up pavements - it’s as common in Chelsea as affordable housing. No, the Patrol is built for storming across sand dunes and marching up mountains. And the new Patrol certainly has the looks to match its abilities. Even a camel would move over when faced with the Patrol’s imposing nose with its extra helping of chrome and raised bonnet centre influenced by Nissan’s enormous Titan pick-up. There’s a more streamlined look for the front bumper which in SVE form now houses deeply recessed foglights. Yet the bumper design maintains the acute approach angle needed for serious off-road driving.

Under the re-profiled wheelarches sit new 17" alloy wheels fitted to the range topping SVE. This version also gets a lockable hard spare wheel cover while all Patrols now have larger rear lights for better visibility and integrated side sills for more graceful access. Important given the Patrol’s 215mm of ground clearance.

Whatever dramas the Patrol is having to contend with, Nissan has tried to make life inside calmer than ever. The new dashboard, for example, will be a surprise to current Patrol drivers. It’s curvy and modern looking with switchgear derived from the X-TRAIL and 350Z. Throughout the interior there are new materials, too. But before you think the Patrol’s gone a bit soft, let’s move onto the engine.

Nissan Patrol Images may not be UK specification cars. Colours and exterior and/or interior elements may differ from actual models.