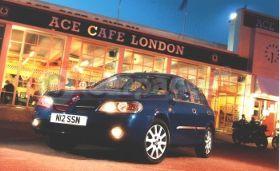 Nissan's Almera has been refreshed with the strong flavour of Primera with sharper front and rear styling and inside a variation on the Primera's N-FORM cockpit concept theme. Engines are almost all updated with more yet to come. And new equipment such as rear parking sensors has been added to a range line-up that's now trimmer and easier to understand. On sale from 1 October, the Almera will be even better value, too. No, really it will be - just read on.

A sword has been taken to the front and rear bumpers, sharpening them up to ape the Primera, and the upper and lower front grilles are now honeycombed. The headlights get clear lenses to cover a new four circle lamp system each with a silver surround. The taillights of the hatchback are even more dramatic with overlapping circles like the similarly bodied Primera. 15" wheels with Primera-esque trims are standard on most Almeras while top models get new 16" alloys. What hasn't changed is the three- and five-door's low, 'surf-tail' roof that bucks the trend towards increasingly high rise hatchbacks. Top hatted funeral directors should shop elsewhere, then.

The Primera broke new ground for interior design with its N-FORM centre console layout. The same thinking has been applied to every refreshed Almera except the entry-grade versions to minimise the number of switches and simplify the operation of the stereo, climate control and, coming next year, DVD satellite navigation. The ambience of the interior has also been smartened up with new fabrics that are easier on the eye than what dazzled before.

There's still a choice of two petrol engines. However, both have been improved with increased power and torque and therefore performance. Yet fuel economy remains as good. The more affordable of the two units is the 1.5-litre now rated at 98 PS - 9% more powerful than before. Torque rises, too, by 6%. The benefit is a 0-62 mph acceleration time that reduces by 0.7 seconds yet average fuel consumption stays at 42.8 mpg. On to the 1.8-litre which now develops 116 PS (as it does in the Primera) meaning the all-important 0-62 acceleration time drops to 10.8 seconds. The engine delivers 3% more maximum pull and still manages to achieve an average fuel consumption of 37.7 mpg.

Within six months, the Almera will be available with two diesel engines both of 2.2-litre size. Initially there's a 110 PS version which, as before, retains the ability to return up to 60.1 mpg on the extra-urban cycle. Next spring, though, the Almera diesel range gets even hotter with the addition of a second engine option rated at 136 PS. Using common rail technology, it'll be more efficient as well. But that's to come.

The company car driver will want to know CO2 figures for the range available from 1 October. The 1.5-litre is cleaner than before with 158 g/km so slotting into the 15% BIK tax banding. The 1.8-litre is rated at 18% and the 2.2-litre diesel the same.

The Almera had become as guilty as many of its rivals for causing mass price list confusion. Soon, though, Nissan's conscience will be clean. A range simplification process that began with Primera now extends to the refreshed Almera with a choice of just three trim levels, namely S, SE and SVE, available from launch. Gone are the Almera E, Twister, Sport, Hurricane, Sport+ and SE+ which has the added bonus that this press release will be four pages shorter than it might have been. So the S and SE survive the cull with SVE effectively replacing SE+. And more letters means more standard equipment. Simple.

Less easy to understand are the refreshed prices. Despite in most cases more power and more equipment, the 2003 model year Almeras are priced lower than their equivalents in the outgoing range. Take the S, for example. The unfreshened - we won't call it stale yet - 1.5 90 PS three-door was priced at £10,350. The 1.5 98 PS three-door will be £9995 - a reduction of £355. And another version just to prove this downward trend is no fluke. The 1.8 113 PS SE five-door was a popular buy at £12,650 meaning the new 1.8 116 PS SE five-door should be even more so priced at £12,050. That's down by £600. And the SE gains rear parking sensors and electronic climate control plus all the other fresher Almera ingredients.

There will be a total of six S-grade Almeras available: three, four and five-door versions with the 1.5-litre unit and the same body-style options teamed with the 1.8-litre and automatic transmission. Here are some of the more interesting and possibly surprising items of equipment fitted to each, including the £9995 1.5 S three-door:

The SE pack adds £655 to the price of an S, the most affordable version being the 1.5 SE three-door at £10,650. Engine availability is more extensive and includes 1.8-litre manual and the 2.2-litre diesel. SE also means the driver gets the N-FORM console layout and a display monitor mounted on top of the dashboard where it's easily seen. This Almera is unusual for its class, and in fact for any class, in having rear parking sensors - their fitment is in line with Nissan's mission to make parking
more of a miss than hit affair. And electronic 'set-and-forget' air conditioning is also rare in the family car sector. The out-going, higher-priced Almera SE didn't have it, that's for sure.

Yes, there's quite a bundle of goodies that gets added along with the extra E on the boot-lid. Here goes, and remember all the below adds just £655 to an Almera S:

And so to the SVE. Apologies to anybody who has their heart set on a four-door SVE. There isn't one. There are eight other SVEs, though, including 1.5, 1.8 manual or automatic and the 2.2 diesel engine options, all priced at £700 above the equivalent SE three or five-door. The SVE difference comes in the form of:

So, a 1.8 SVE five-door will be priced at £12,750. That compares rather favourably to the no-longer-available 1.8 SE+ equivalent that was listed at £13,300. Told you the refreshed Almera was much better value.