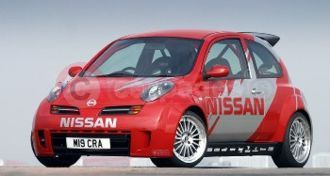 Nissan GB has created the craziest, road-legal Micra ever. It’s called the R which is just what you’ll be screaming when this mid-engined, mad little car rockets you to 62 mph in less than five seconds and onto a 150 mph top speed.

The Micra R started its life as a concept car at the last Geneva Motor Show. But its designer, Christopher Reitz, didn’t want it to stay that way – he wanted his creation to be driven. And Nissan Motor (GB)’s managing director, Brian Carolin, in conjunction with Ray Mallock Limited (RML) has made it happen.

RML ran Nissan’s super successful British Touring Car Championship campaign in the late Nineties. And motorsport (for the road) is very much what the Micra R is about. From nose to tail the R is unlike any Nissan Micra ever produced. For example, you won’t find an engine under its bonnet – just a radiator and a fuel tank. And the Micra’s clever rear sliding seat has been binned in favour of a 265 bhp fully race-prepared engine. It’s still got the Intelligent Key system, though.

The R started life as a three-door Micra 1.4 SX. Most of the body was removed so that RML could match the dramatic styling of the Geneva concept car including its 100 mm stretched out wheel arches and Nissan Motorsport Flame Red and Blade Silver paint job. Care was then taken to adapt the aerodynamics and air intakes to suit its mid-engined layout.

The engine is located beneath an aluminium honeycomb cover with a carefully cut glass porthole to allow a glimpse of the carbon fibre cam covers. It’s based on the 2.0-litre unit that powered the winning BTCC Primera with two choices of engine ‘map’, both of which are governed by a MoTeC M4 Electronic Control Unit.

Power is transmitted via a Hewland six-speed gearbox with sequential shift. The short racing exhaust exits centrally at the rear through a meaty looking big bore pipe. But an even more noticeable change over the standard car are the R’s 18 inch, 18 spoke alloys specially machined for the project by Image Wheels. Toyo supplied its highest specification road car tyre, the Proxes T1-S with a ‘footprint’ that’s nine inches wide. Behind those wheels lie enormous drilled disc brakes front and rear with four-pot callipers. Measuring 350 mm at the front and 330 mm at the rear, these brakes were naturally supplied by Brembo – the same company that stops Nissan’s 350Z and Skyline GT-R. There’s commonality with other Nissans in the R’s radiator (Almera dCi 136) and suspension (also Almera).

Inside, the R is just as curvy as a standard Micra. But maybe not quite as comfy. Seated low down in Alcantara upholstered racing seats, the driver is faced with a suede rimmed Sabelt racing wheel. The standard dashboard, door panels and centre console have been flocked to give them a velvety, non-reflective finish. And behind the normal Micra instrument binnacle is a MoTeC digital data screen. There’s no carpet on the floor of this Micra, instead RML thought aluminium sheeting more appropriate matching the integral roll bar. There’s no air conditioning but the R retains its electric door mirrors and three cupholders even though the car can only seat two…

And what a ride they’ll have. Sadly few will get the chance to drive the Micra R, just some lucky journalists and customers but Nissan will be exhibiting the R at various shows around the country starting with the Japanese Performance Show at Santa Pod. So even if this mad Micra isn’t a car for the masses – the R is strictly a one-off – Nissan wants masses to see it. And Christopher Reitz, the Micra’s designer, will be the first in the queue.