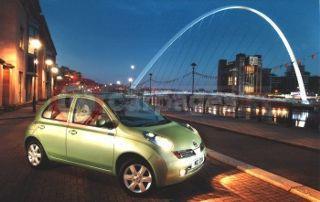 Within one week of the formal start of sales – 15 January 2003 (23 January for continental Europe) – Nissan had recorded over 13,000 confirmed orders (over 5,000 of which were from the UK) for the new Micra in Europe's major markets.

Micra sales momentum is expected to grow still further with sales starting in some central and eastern European markets in March, and the launch of the first diesel version of Micra in April. A 48kW version of the acclaimed Renault 1.5dCi engine will be followed in September by a potent 60kW version of the same unit.

Nissan's Sunderland plant has already increased capacity by over 12% in order to cope in response to this strong demand.

With Micras filling Nissan showrooms all over Europe from the beginning of January, a positive reception from Europe's automotive press has been matched by customers. By the first official day of sales, 23 January, over 13,000 confirmed orders had been taken, significantly exceeding expectations.

* A European total of over 13,000 orders were received from the following markets: Austria, France, Germany, Italy, Spain, Switzerland, The Netherlands, UK. The new Micra has a projected annual volume of over 160,000 units over the lifecycle across Europe – all will be built at Nissan's plant in Sunderland, UK.