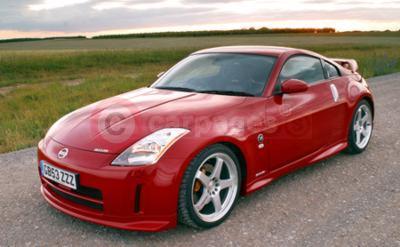 Nissan Motor (GB) Ltd has developed a 350Z NISMO concept just for the Goodwood Festival of Speed fitted with racing and styling parts designed by Nissan’s mad motorsport arm in Japan. Some of the bits are available now while others could be on sale soon depending on how much of a noise the Z concept makes at the event running this weekend, 25 to 27 June.

Noise is very much part of the Goodwood experience. And the same goes for the 350Z, too. As if the standard 350Z doesn’t sound intoxicating enough (for the car nut, that is), the NISMO sports exhaust fitted to the Goodwood concept gives it an even more spine tingling note. 10.7 cm wide, twin oval tailpipes are the only external sign of an exhaust system developed for even sharper engine response during fast driving. The cost is likely to be around £1000. Assuming it gets through our noise and emissions regulations, that is. Rules can be so dull.

The 350Z made its debut at last year’s Goodwood Festival and turned more heads than cars costing 10 times as much. More jaws will drop at the 350Z being entered into the 2004 Supercar Run as it’s fitted with the most dramatic visual item in NISMO’s range, the Aero Kit developed in conjunction with Polyphony Digital producer of ‘GRAN TURISMO’. The images created by the game’s development team were translated into production reality by NISMO after being aerodynamically tested. So as well as looking the business, the Aero Kit increases the forces on the front and rear of the car – there’s more grip at the front and added traction at the rear.

The standard front bumper is replaced by a deeper one with a low lip spoiler which is colour coded to the vehicle. And an additional louvre in the bumper grille gives the 350Z an even wider and meaner look. Side skirts rectify irregular air stream around the tyres at high speeds. Their function is linked to that of the rear under-skirt and along with the front lip spoiler, make the 350Z look literally sucked to the road. But all of this wouldn’t be complete without the high mounted rear spoiler or wing that sits on top of the tailgate below the rear window. An exact price for the NISMO Aero Kit hasn’t been confirmed but it’s going to be around £2500 including VAT and fitting. Initially the kit will only be available on new Zs but later Nissan GB is hoping to establish a retro-fit programme for cars that are already out there.