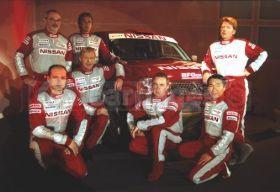 At a press conference in Paris on 4 November, Nissan announced the names of the Rally Raid Team for the Dakar 2003 and also unveiled the vehicle they will be competing in. Nissan has a long history in the event through independent teams, but for the first time ever will be entering this year with a works team. The Nissan Rally Raid Team will be made up of five crews, in the latest Pickup model, all entered in Group 2 Super Production Cars Category. The drivers will be Ari VATANEN, Giniel DE VILLIERS, Kenjiro SHINOZUKA, Thierry DE LAVERGNE, and Khalifa Sultan AL MUTAWEI.

The team will be managed by Alec Poole, Nissan Europe’s Motorsport General Manager, with invaluable assistance from André Dessoude. André’s Rally Raid experience is legendary, while Alec a previous BTCC Champion and Le Mans driver (14th in 1968) has considerable rally experience in finishing 2nd on the original London – Sydney Rally with Paddy Hopkirk and has co-driven for Roger Clark. Alec also masterminded Nissan’s dominance of the BTCC in the nineties. Alex is also supported by fellow Irishman, Fred Gallagher, who will be responsible for strategy. Fred has won five FIA World Championship Rallies and taken outright victory in no fewer than six FIA Cross Country Championship events. The Chief Engineer is ex rally driver Glyn Hall who designed Nissan's version of the Rally Raid Pickup and has developed it competitively over the last three years for Nissan South Africa.

This challenging, adventurous race has fans across the world, due to the conditions the cars and drivers face, the speeds they achieve over difficult terrain, and the huge distances they cover. Nissan has built up over 50 years of 4x4 heritage, leading up to the current models, from top selling X-TRAIL – which is now the benchmark of the compact SUV in Europe – to the Pickup which is sold in over 150 markets worldwide. Dakar is an ideal opportunity for Nissan to demonstrate its high level of expertise and the performance capabilities of its 4x4 range to the world.

Nissan has committed to a four year plan, entering the Dakar between 2003 and 2006.