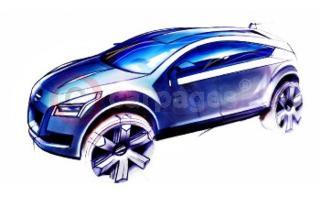 (Paris) - Nissan will be unveiling the QASHQAI concept car for the first time at this year’s Geneva Motor Show.

The QASHQAI is a compact Crossover with an advanced electronic four-wheel drive system. It reflects Nissan’s belief that consumers’ tastes are changing to echo their lifestyles which are becoming more active. Buyers of compact Crossovers will want enough interior space for their family, the ruggedness of a 4x4, as well as the comfort and ease of driving of a traditional passenger car. In addition, buyers increasingly want a vehicle which is distinctive, allowing them to express themselves and to stand out from the crowd.

The concept is the first complete design project to have come from Nissan Design Europe’s new facility which opened in London in January 2003 and is now home to over 50 international designers, modellers and support staff. The studio’s mission is to design the next generation of Nissan cars for Europe.

With the QASHQAI, Nissan has been concentrating on customer segmentation to improve its understanding of the lifestyles and activities of its prospective customers. As a result, Nissan is better able to identify niches which will become market segments in years to come.

Although a concept car, Nissan has recognised that prospective owners of the QASHQAI would be based in an urban environment. They will be successful in their careers considering their age. As well as working hard during the week, their car will allow them to escape the city at weekends and play hard, seeking adventure with like-minded friends.

Reflecting the lifestyles of its potential owners, the QASHQAI offers space and flexibility. The interior of the car reflects the varied role it will have to play, with an innovative folding seat arrangement allowing bikes, outdoor activity equipment and the weekly shopping to be easily stowed. This flexibility is aided by rear doors which are hinged on the back edge, allowing a massive loading aperture thanks to the lack of a B-pillar. Despite the lack of B-pillar, the structural strength of the QASHQAI is uncompromised thanks to the individual seat mounting.

The exterior design incorporates strong Nissan DNA seen in the design of the Micra, 350Z and Primera. The QASHQAI’s large wheels and exaggerated wheel-arches give the vehicle a purposeful stance, echoing the strength of a large 4x4, but with delicate design touches which endow it with a softer, less aggressive look.

Nissan is among the first manufacturers to recognise the evolution in customer tastes which will see consumers increasingly buying cars like the QASHQAI and it represents an interpretation of how a future model may look.

In addition to the QASHQAI, Nissan will also have one of the Rally Raid Pickups driven by Colin McRae, Ari Vatanen and Giniel de Villiers which won four of the gruelling stages of the Dakar rally in January.

As well as these two very special cars, Nissan will also have on display the 350Z, Micra, X-TRAIL, Pickup and Primera. Visitors to the Nissan stand will also be able to enjoy the relaxation zone where they can rest their tired legs.