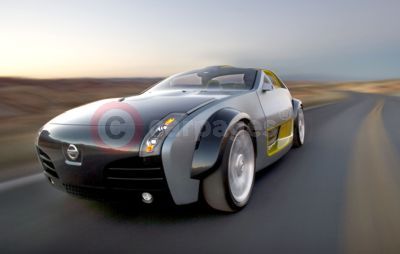 It seems fitting that one of the key sources of inspiration for the dramatic new Nissan URGE concept, a spare, technology-heavy, performance-oriented sports car design exercise, would be found online - in the results of an Internet survey of approximately 2,000 young car and gaming enthusiasts. Asked what they would ideally want in a car, the top responses were “performance” and “technology”.

“Not surprisingly, most of the young, primarily male, respondents to our survey said that they want a small, fun-to-drive sports car that can incorporate the technology products that they use on a daily basis, such as cell phones, mp3 players and game consoles,” said Bruce Campbell, vice president, design, Nissan Design America, Inc. (NDA), La Jolla, Calif. “We also learned that these young adults are highly social - they’re looking for vehicles with the flexibility to take along a couple of friends. They also don’t want a car to dominate their social lives or budgets, so affordability is a definite issue.”

URGE, which makes its world debut at the 2006 North American International Auto Show in Detroit in January 2006, addresses all of these issues. In creating the URGE concept, the designers at NDA, kept these core survey results in mind - while adding a few ideas of their own. URGE emerged as a minimalist sports car - pure Nissan in its look, innovative features, spirited performance and, certainly, its sports car heritage.

URGE is also infused with a gamer’s sense of adventure - with the bare, exposed look and driving experience of a high performance motorcycle, but balanced with a high level of safety features.

“We want URGE to replicate the raw motorcycle experience as much as possible, with the exposed engine, door panel cutouts and open top. Motorcycles are exhilarating to drive and we want this car to feel the same way,” said Campbell. “At the same time, we want parents to think of this car as safe, which, for example, led us to include the integrated cage structure and visible passenger’s side airbag. URGE, like its target buyers, has a foot in each world, adventure and reality.”

The front-engine, rear-wheel drive URGE is designed to be lightweight - with a target weight of just 2,400 pounds - and active. Its performance is expressed in quickness and agility, rather than brute horsepower and top-end acceleration. Its wheelbase is the same length as Nissan’s popular 350Z, but URGE’s unique, open body is a full 16 inches shorter than the Z thanks to its short front and rear overhangs.

“The performance targets for URGE, in keeping with an affordable, $20,000 production price target, dictate a more realistic approach to the parts list than say our 350Z or GT-R Proto,” said Campbell. “URGE’s sense of exhilaration comes more from the exposed body and driving environment than costly components. It’s a sports car for first-time car buyers. The Zs and GT-Rs will come later in the buyers’ lives.”

URGE’s bare, exposed exterior is highlighted by its cycle-style fenders and stripped away body panels. The special glass bonnet exposes the top of the engine, while the doors feature see-through cutouts.

The body is highlighted by an extensive aluminum “cage” structure, which includes an aluminium centre structure that runs from the engine bay to the interior centre console. The URGE exterior also features aluminum/composite construction and a collapsible, storable manually operated canvas top. The 4-bar hinge scissor doors are extra long for access to the rear seat. When the door release button is engaged, the glass panel of the unique door cutout slides up, allowing the occupant’s legs to easily pass in or out.

“One of our other goals in the URGE design was to show off the cool material used in concept form – the aluminium foam in the doors, the perforated metal mesh interior panels, the lightweight exposed seat frames and the “Mirror Crystal” aluminium coloured body panels,” said Campbell. “We’re also proud of our solution to the limitations of a typical two-seat sports car with the hidden alpha seat.”

URGE’s unique third bucket seat is tucked behind the driver and passenger in a hidden compartment. When the cover, which is activated by the driver’s cell phone, is down, URGE looks like a traditional sports car. When up, there’s room for an additional passenger.

The URGE interior also features an F1-style steering wheel and a compact instrument panel with a driver information monitor, two side screens and a pair of docking stations for the driver’s mp3 audio player and cell phone. The centre monitor can be switched between five customisable screens, including navigation system, climate controls, audio and suspension/performance tuning. The menus are scrollable using steering wheel-mounted controls.

“In keeping with the rapidly changing technology demands of our target buyers, URGE allows the driver to be in charge and to bring to the vehicle a high degree of personalisation. The navigation system is located in front of the driver, not the passenger, the driver’s cell phone acts as Intelligent Key to start the vehicle. We provide the audio speakers, the owner provides the audio drivers,” said Campbell.

Another unique feature of the URGE concept is its integrated gaming system. Powered by Xbox 360, when the driver wants to change to game mode, he or she disengages the driving controls and activates the game system. A screen folds down from the rearview mirror, the steering wheel and pedals become game controls, and the game’s audio is played through the vehicle’s audio system. The URGE concept features a special Nissan-only demonstration edition of Project Gotham Racing 3.

“The Echo Boomer generation, born between roughly 1976 and 1996, has grown up on video games. By 2012, nearly all 87 million of them will be of driving age and they will be looking for much more from a car than simple transportation - entertainment, a social space, personalisation and flexibility,” said Campbell. “The ability to park the car and activate the game system adds another dimension of entertainment beyond the pure driving pleasure of the URGE. Like its drivers, this vehicle is able to switch between the real world and video world whenever the URGE strikes.”