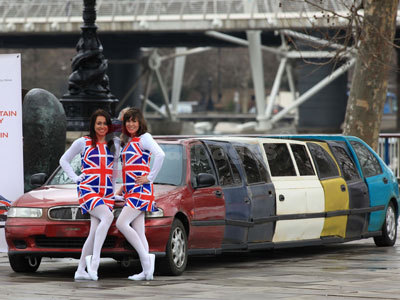 Nissan is set to extend its British Built Trade-in Scheme - and to mark the occasion a unique 36ft extended vehicle made out of scrapped car parts has been constructed. The announcement comes as the Government's Scrappage Scheme draws to a close, and sees Nissan take the driving seat in the campaign to further support the British automotive industry.

New Nissans eligible for the improved offer, which will commence on 1st April 2010 and run until 30th June 2010, include the Nissan Micra, Note, QASHQAI or QASHQAI+2, all of which are produced at Nissan's Sunderland Plant.

Commenting on the extension of the Trade-in Scheme, Managing Director of Nissan GB, Paul Willcox said: "There's no doubt the Government's Scrappage Scheme along with our own Trade-in Scheme has given the UK automotive industry a boost. As Britain's biggest car builder, we hope that by extending our scheme we can sustain the positive results seen to date and continue to support the British economy."

Earlier this month, Nissan also announced that the Nissan LEAF electric vehicle will be manufactured at the company's Sunderland plant from early 2013, making the UK the third global manufacturing location for Nissan electric vehicles.

This comes on top of the news that Nissan has introduced a temporary third production shift at the plant in response to continuing high demand for the award-winning Nissan QASHQAI. Recruitment for a further 400 new fixed-term manufacturing posts at the Sunderland plant has commenced, with a further 160 temporary posts secured.

Speaking at the special scrappage vehicle unveiling, Nissan GB Marketing Manager, John Parslow, added: "The Government's Scrappage Scheme has had an invaluable impact on the UK automotive industry. Today we wanted to mark the success enjoyed to date and to celebrate the fact Nissan's British Built Trade-in Scheme is to live on - our extended scrapped vehicle is a visual representation of this."

Responsible for the design and construction of the unique vehicle - which is equivalent in length to that of a double decker bus - was renowned sculptor Graham Wardale at Andy Knight Ltd, a specialist props and sets company.

No stranger to creative briefs, Graham's work specialising in metal structures has seen him create sculptures for the film 102 Dalmatians, a replica Spitfire for Vogue and a 20ft skeleton for a collaboration between Tim Walker and Tim Burton. The Nissan brief was, however, Graham's dream job, enabling him to draw on his previous experience as a motorcycle courier with his love of scrap heaps to create the unique vehicle.

Taking a team of four over 500 hours to create, the vehicle consists of over 2,000 parts including that of a door of a limousine and its own set of furry dice. A static sculpture, with no engine or means of motion, the vehicle was transported into London in eight parts and built on site, escaping the London congestion charge.