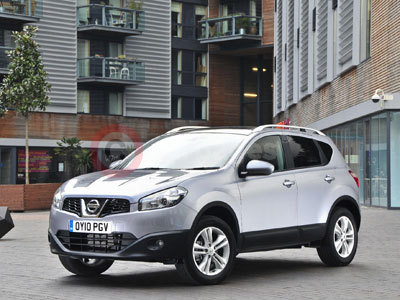 British built models are leading the way in a fantastic month of new model sales for Nissan. Representing a huge 59% leap over the same month last year, March 2010 has been a bumper month for the marque that's putting the wind back in the sails of the UK manufacturing industry.

With a car market share of 3.7% both in March and year to date, Nissan is the second biggest selling Japanese brand in the UK, while it remains the number one car builder in Britain. LCV sales are just as impressive, resulting in a 3.8% market share for Nissan's hardest working models.

It's the models built here on home turf that have reached new sales heights in March 2010. Top of the charts is the Nissan QASHQAI. A 13% jump compared with the same month in 2009 sees the recently revised five-seat model post sales of 3,997 in March 2010. Buyers are also catching on to the merits of the seven-seat Nissan QASHQAI+2, with a massive 176% increase taking the total to 1,104 last month.

The appeal of the Nissan Note supermini-MPV is also going from strength to strength, with a 70% boost compared with March 2009 resulting in 3,479 sold last month. Not to be outdone, the Nissan Micra has posted an even more impressive 79% uplift with 3,426 sold in March 2010.

Combine sales of all the models built in Nissan's Sunderland Plant and you'll find they account for a staggering 81% of all Nissan cars sold in the UK in March 2010. This success is thanks in part to Nissan's recently extended Scrappage-inspired offer, which provides a minimum £2,000 trade-in against a British built Nissan for any model over 7 years old.

Nissan's UK MD, Paul Willcox comments: "With the industry still under pressure, we're delighted to be leading from the front for the UK manufacturing industry. The success of the QASHQAI, Note and Micra shows there's nothing our Sunderland Plant can't achieve. Looking further ahead, we have every expectation that this sales success will continue. Following the announcement that the all-new Electric LEAF model will also be manufactured in Britain along with the Juke crossover model, the future is looking very bright for Nissan in the UK."