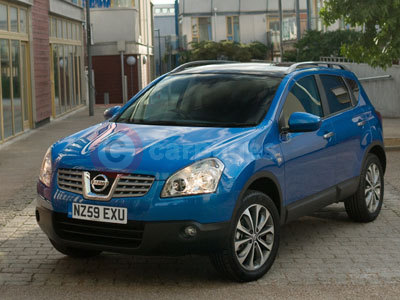 British built, British bought, British brilliance! On the day the official new car sales figures for 2009 are announced, Nissan is delighted to be celebrating tremendous success in the face of one of the toughest years ever faced by the motor industry.

Increased market share, an uplift in sales and significant leaps up the new car sales charts are testament to the quality of all new Nissans, but there are three specific models without which such achievements would have been impossible - and they are all built right here in the UK. The Nissan Micra, Nissan Note and Nissan QASHQAI all exceeded expectations in 2009 to contribute to a Nissan new car sales total of 77,924 - a 17% increase on the 2008 figure.

This extraordinary increase was not reliant upon the Government's Scrappage scheme which has resulted in a relatively small uplift in sales since its launch in May 2009. Nissan offered its own more enticing new car buying incentive by guaranteeing a £2,000 minimum trade-in price for cars aged 8-10 years old for anyone buying a British built Nissan. Leading finance packages, enhanced trim levels and high quality across the entire model range also all played their part in the 2009 sales achievements.

The Nissan QASHQAI has also capped a fine year with its third appearance in the monthly list of top ten best selling cars in the UK. A total of 2,759 Nissan QASHQAI and Nissan QASHQAI+2 models were sold in Britain in the last month of 2009, helping Nissan to be the number 1 best selling Japanese brand in December 2009.

The 8th biggest selling brand in the overall 2009 UK new car sales charts, Nissan is now ahead of key competitors including Honda and Citroen. It should come as no surprise, therefore, that Nissan's market share of 3.91% (up from 3.11% in 2008) is its highest since 2000.

Nissan's UK MD, Paul Willcox comments: "We are delighted to end 2009 on such a high - and excited about what this means for 2010. Last year was unlike any other with the toughest economic conditions to face the motor industry in living memory, but we have still managed to increase our year on year sales. What's more, with lots to look forward to in the coming 12 months we have every intention of continuing this success in 2010."

The most exciting new arrival in wintery Nissan showrooms in January 2010 has to be the new Nissan Cube. On sale this month, the cult-car from Japan provides a trend-setting solution to urban transport for the design connoisseur - and is set to take the high street by storm.

The Nissan Cube will be followed in March 2010 by a revised version of the Nissan QASHQAI, which will enhance the model's sporty appeal with improvements inside, outside and under the skin. March will also see the arrival of Nissan's hottest drop-top, the Nissan 370Z Roadster, just in time for the spring.

And as if that's not enough, 2010 will also mark the arrival of the all-new Nissan Micra and Nissan Juke models before the end of the year. Here's to another exceptional Nissan year ahead!