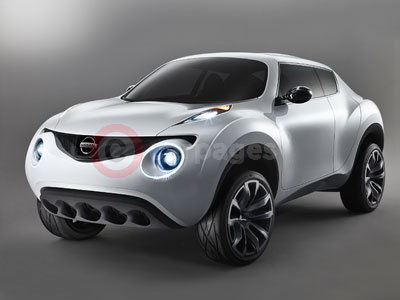 The Nissan Qazana makes its first ever appearance at the Geneva Motor Show. Inspired by a simple desire to have fun behind the wheel, the Nissan Qazana shows that mind-numbing motoring could be a thing of the past.

Officially the Nissan Qazana is a showcar, a study into how a small car of the future could look. But with the announcement that a small crossover - a baby brother to Nissan QASHQAI - will be built at the company's Sunderland factory in the UK, the Nissan Qazana's significance should not be underestimated.

"The Qazana concept is an intelligent, all-wheel drive crossover which is masculine, agile, lean, and designed for the tough city streets. Our team at Nissan Design Europe in London realised this image with the motif of a modern day beach buggy and four-seat motor-bike." explains Atsushi Maeda, Studio Chief Designer, Nissan Design Europe.

Compact overall dimensions (4060mm in length, 1570mm tall, 1780 wide and a wheelbase of 2530mm) mean the Nissan Qazana would be ideally suited to the urban environment. Yet its advanced specification and energetic styling suggest an ability that goes far beyond the city walls.

By mixing SUV and sports car styling cues, NDE's design team has created a highly individual Crossover quite unlike anything else on the road. The tall stance, truncated rear styling and short front and rear overhangs underscore its feeling of robustness and strength, but the low roof line, assertive side window graphic and broad shoulders hint at a sporting ability absent in traditional all-wheel drives.

At the same time, rounded elements - notably the wheel arches and bonnet - evoke a friendly ambiance and provide a link with existing Nissan Crossovers. Indeed, the Nissan Qazana has the signature Crossover design detail in the rising window line at the rear, also found on the Nissan Murano and Nissan QASHQAI.

The profile is dominated by the prominent wheel arches and by the body's high waistline, which combine to give an impression of strength and which contrast vividly with the slim side windows. Echoing a style first seen on Mixim, Nissan's high performance electric coupe concept shown at the 2007 Frankfurt Show, the glasshouse resembles a crash helmet visor.

Although it appears at first glance to be a two-door coupe, the Nissan Qazana has a further pair of rear-hinged half doors to ease access to the rear compartment. All the doors are electrically operated and for safety reasons the rear pair can only be activated once the fronts have been opened. With no conventional B-pillar, access to the interior couldn't be easier.
Published : 09/03/09 Author : Staff