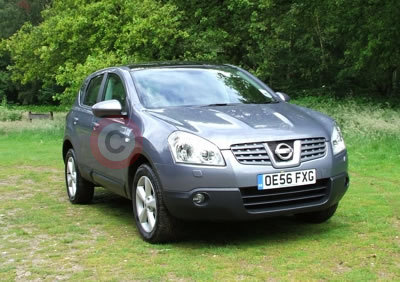 The QASHQAI (pronounced Cash Kai), is named after a desert-dwelling tribe who live near the Zagros mountains, in South Western Iran. However obscure the origin of the name, Nissan’s new crossover is bound to become known as the ‘Cash Cow’ - if it hasn’t already.

It’s a curious thing, but unless you’ve seen a QASHQAI in the metal, it is very difficult to gauge its size from photographs. And that can only mean that the designers have fulfilled their brief, which was to create a crossover vehicle that has all the benefits of an SUV, such as a high driving position, and the looks, comfort and feel of a hatchback, while not taking up too much road-space. In fact, we are told that the QASHQAI has a similar footprint as the Ford Focus, which is a fair indication of its size.

So, while not excessively large, it is imposing and stylish, in a strange way. There are few design lines and a distinct lack of the fashionable but overly-flared wheel arches. From that brief description, it might seem bland, but it isn’t - a better word would be, subtle.

Sat in the comfortably contoured seats, which were chocolate leather in the test car, the driver is faced with quite an array of buttons - some on the rake and reach-adjustable steering wheel and plenty more on the centre console.

The simple, soft-touch fascia incorporates the neat instrument nacelle and a fairly slender centre console. In the TEKNA, the centre console was topped by the screen for the optional sat-nav system, which looks like it should fold away but doesn’t. Nevertheless, it is perfectly positioned in line of sight, making routes and instructions easier to follow. Below the large, round air-vents, is the control panel, which also includes the audio controls. Nestled below that, are the temperature controls and a handy, 12v socket.

I should point out that the Satellite Navigation system can be ordered with ACENTA and TEKNA models only. A 6-Cd (in-dash) autochanger is standard on these versions, as is the audio system with six speakers. The base, VISIA model comes with a single CD/radio and four speakers but standard throughout the range, is Bluetooth connectivity.