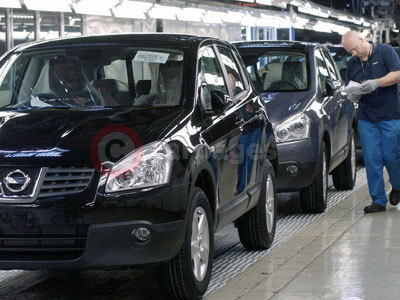 Nissan is to launch a temporary third production shift at its manufacturing plant in Sunderland in response to continuing high demand for the award-winning Nissan QASHQAI.

Throughout 2009 the plant has been working hard to satisfy orders on two shifts, but sales of the popular crossover have now reached levels where demand is out-stripping supply.

And the model will become even more desirable in March 2010 when an extensively updated version goes on sale across Europe.

Therefore, from May 2010, a nightshift will be added to the Nissan QASHQAI production line. Although the market will dictate how long the nightshift remains in operation, it is expected to be maintained for around six months.

To support this, recruitment will begin next month for 400 new fixed-term manufacturing posts at the plant and allow retention of an existing 160 Temporary staff. It is anticipated that additional posts will also be created across Nissan's supply chain.

Nissan first implemented a temporary nightshift at Sunderland in June 2008 to satisfy unprecedented demand for the model. This was withdrawn last January in response to the global economic crisis.

But the model was quick to recover and the latest forecast for the 2009 Financial Year (ending 31st March 2010) anticipates more than 200,000 Nissan QASHQAI sales in Europe, making it Nissan's best-selling model.

Trevor Mann, Nissan Senior Vice President for Manufacturing, Europe said: "Nissan is committed to delivering customers' cars as quickly as possible, and our staff in Sunderland has been working incredibly hard to achieve this.

"However, QASHQAI continues to buck the trend of a generally depressed market, and we have now identified the need for an additional shift to cover a high volume request in the first half of the 2010 Financial Year.

"Doing so will allow us to get cars to our customers more quickly and also provide the significant increase to production needed to fill the delivery pipeline to our European dealer network."

The Nissan QASHQAI was created at Nissan's design studio in Paddington, London, developed at its technical centre in Cranfield, Hertfordshire and is manufactured in Sunderland.

Since its sales launch in March 2007, more than half a million units have been sold across Europe, and the model accounted for 60% of Sunderland's 2009 total production volume of 338,000 cars.

This figure saw the plant recently recognised as the UK's largest car producer for the 12th year running.

Trevor Mann added: "As in 2008 the 3rd shift will be a temporary measure, but it will provide a welcome boost to the plant, our suppliers and the manufacturing sector in the North East during what is forecast to be another tough year for the car industry."

The Nissan QASHQAI will receive another lift in the spring when an extensively updated version will be launched.

In addition to improvements in refinement, the refreshed model will feature a new front-end design, LED rear lights and offer customers two new exterior colours as well as an environmentally efficient 'Pure Drive' diesel engine producing only 129g/km of CO2.

The updated Nissan QASHQAI will be followed in the autumn by the sales launch of the all-new Nissan Juke crossover, which will also be produced in Sunderland.

Based on the Qazana concept car, the Nissan Juke will offer customers an exciting alternative to the hatchback. As the fourth Crossover in Nissan's European range, it will reinforce the brand's pioneering Crossover leadership in Europe.

The Nissan Juke will be unveiled to the global media on 10th February 2010 ahead of its public debut at the Geneva Motor Show in March 2010.